Another set of "viewer request" cartoons. The first request is from Matt Cottontail, who is none other than Buster Bunny. He obviously requests a Buster cartoon. Babs complies, and Buster goes off to prepare, with Babs asking the audience if the whole thing is rigged.

In the second act, an ant unsuccessfully persuades Buster and Babs to show an ant cartoon. The next viewer request is from Anna Malicious, who is none other than Elmyra Duff. She requests a cartoon with lots of bunnies. Buster and Babs deny her request and walked away, so she decides the next cartoon will star her.

Buster appears as Mr. Popular in the third act. Shirley the Loon asks him if he has friends who want him to follow the crowd, and if he should follow them or risk being called a Mega-Weenie if he doesn't. Buster tells her that sometimes following the crowd can land you into trouble, showing her the last cartoon of the day.

Buster's Guide to Goofing Off

Buster teaches the viewers about procrastinating when there is work to be done while working on his class project, a volcano. It's 2:00 AM, and Buster is passing the time by looking through his photo album. One of the pictures in the album is of the time he had to buy ice cream for him and Babs but only had enough money for one cone and they had to share it. He calls Babs, who was asleep at that moment, and tells her about the picture. Babs asks Buster if he should be working on his project. Buster immediately hangs up, as he doesn't want Babs getting suspicious.

While he barely manages to work on his project, he gets hungry and sees what he has to eat. He spends the next hour and a half making salami. After eating, he decides to take a short nap to help him concentrate. When he wakes up, it is 7:00 AM. He immediately works on his project, as the Science Fair is only an hour away. He puts the volcano together using wire and and Plaster of Paris. He orders a stick of dynamite from the Acme Catalogue and Little Beeper immediately delivers it.

At the science fair, Buster finishes his volcano just seconds before Elmer Fudd judges it. He demonstrates his project, which destroys the gym and everyone else's projects. Elmer presents him with a ribbon that says 1st Exhibit to Be Done Over. The other students are angry at Buster for both procrastinating and destroying their projects. Buster's final rule for the viewers is to outrun all those who don't follow Buster's Guide to Goofing Off.

Late one night at the Acme Mall, Charlie Dog is running a pet store to try to sell the pets to customers. He tells the pets to look cute so that customers will buy them. 5 minutes to closing time, Elmyra Duff appears with her parents, riding a stroller. Her father asks her mother if she's too old to be riding a stroller, but her mother tells her she looks so cute in it. Elmyra tells the viewers "Now you know where I got my winning personality." They go to the pet store and most of the pets hide. Not wanting to leave, Elmyra switches herself with an armadillo. The mall closes and Elmyra has it all to herself. She decides to wed the pets, so she dresses them using doll clothes from the toy store nearby.

Meanwhile, Arnold the Pit Bull is working as a security guard. He catches Elmyra at the pet store, but she dresses him as a frog with a party hat. As she does this, two criminals sneak into the mall, planning to rob the jewelry store. Elmyra dresses Arnold again, this time as a flower girl. He runs away, but she has him on a leash and is dragged behind him. They pass the jewelry store and the leash ties the criminals up.

The next morning, Elmyra is on the news and the mall's manager rewards her for capturing the criminals by letting her have anything she wants from the mall. She chooses Arnold, who she has as her new pet.

A colony of ants are sent by their leader to bring back sugary sweets, but The Lone Ant always brings back healthy food, like soy beans. The Lone Ant doesn't like sugar, but is ordered by his boss to eat it. When he tries it and hates it, he is exiled from the colony.

The next morning, the Ant Colony follows a trail of cupcakes to a chocolate factory. The havey hit the jackpot, but the owner finds them and decides to make chocolate-covered ants. The ants are rescued by The Lone Ant who uses one of the chocolate bars to release them from the basket. He gives them Life Saver candies to help them escape.

That night, the colony has a dinner in the Lone Ant's honor. The Lone ant serves healthy food and the leader tries to sneak sugar. The Lone Ant catches him and he learns to like it.

Title card for Buster's Guide to Goofing Off

Buster's photo of him and Babs sharing ice cream

Buster's blue ribbon reads, 1st Exhibit To Be Done Over

Babs, Fifi and the other student are angry at Buster for destroying their projects

How About An Ant Cartoon?

The Ant falls into the cage

Title card for Elmyra at the Mall

Charlie Dog as the director of the Acme Mall's pet store 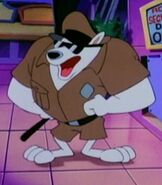 Elmyra dresses Arnold as a frog...

With Arnold out of the way, two bandits sneak into the mall

...then as a flower girl

Elmyra gets the circling birdies...

...but being the animal lover that she is, she gives one of them one of their own

Elmyra takes Arnold home with her in a stroller

Title card for Hold the Sugar

Gag credit: These end credits - Are endless, aren't they?

"Let the show begin!"
Add a photo to this gallery

Retrieved from "https://tinytoons.fandom.com/wiki/You_Asked_for_It_Again?oldid=41031"
Community content is available under CC-BY-SA unless otherwise noted.