Who Bopped Bugs Bunny? is the 50th episode of Tiny Toon Adventures. It was written by Paul Dini, Earl Kress, and Sherri Stoner, and Directed by Kent Butterworth.

Sappy "Slaphappy" Stanley is building a robot copy of himself while watching the Bugs Bunny cartoon "Knighty Knight Bugs". Bugs' award ceremony is tonight and Stanley plans to rig the show.

Pepé Le Pew is the host of the ceremony. He welcomes both the Looney Tunes and Tiny Toons, who appear in the audience. The Tiny Toons are at the very top of the balcony, unable to get a good view of the stage. Hamton is hungry, and Buster and Babs go get some snacks for him.

Backstage, Pete Puma checks on Bugs Bunny and Daffy Duck. Daffy is jealous of both Bugs' 1959 Shloscar award and the fact that Bugs is getting another award that night. Sappy Stanley is also getting ready backstage, but to get his revenge on Bugs. He spray-paints a fake award and sends his robot copy onstage to talk to Daffy Duck, whom only Plucky and Hamton cheer on. As Stanley's robot copy talks to Daffy, he slips the fake award in Daffy's pocket. The real Stanley disguises himself as a female so he can sneak offstage undetected. He charges through Buster and Babs on their way back to their seats, with a large pile of snacks in hand. Stanley sneaks into Bugs' dressing room and knocks Bugs out with his 1959 Shloscar. As Pete checks on Bugs, he finds that Bugs is missing, and the police rush over.

On France's news network, it is revealed that Daffy Duck had been framed and arrested for the crime of kidnapping Bugs and stealing his prized Shloscar. Buster vows that he and his friends will not leave Paris until they find Bugs.

In the second act, the Tiny Toons know that Daffy was innocent. Plucky takes Hamton with him to help break Daffy out of jail. Buster and Babs decide to solve the mystery by interviewing Stanley, as he was the toon closest to the scene of the crime.

Stanley is in his mansion, watching his cartoons. He notices Buster and Babs at his door, and gives them his autographed pictures and sock trunks. Buster and Babs tell them that they are not fans, but want to talk to him about Bugs' disappearance. Stanley refuses to be interviewed, as he doesn't want them to find out that he was the one responsible for Bugs' disappearance. They dress in trench coats and pester him, so he kicks them out.

Meanwhile, Plucky and Hamton disguise themselves as ninjas in an unsuccessful attempt to rescue Daffy. They are detected, arrested, and put in the same cell as Daffy. Daffy, ungrateful that they tried to rescue them, tells them, "Nice try, nin-jerks!" Plucky whispers to Hamton, "Next semester, I'm getting Foghorn for my mentor."

Buster and Babs search the theater to see if there are any clues there. They look inside the janitor's office, where the dress Stanley used for his disguise was. They also notice a secret passage between the janitor's office and Bugs' dressing room, so they decide to interview Stanley again.

Stanley is at Acme Studios, preparing for his next cartoon while hectoring and terrorizing his staff and film crew in a fit of rage apologized for his actions. As the cartoon is being filmed, Buster and Babs interview Stanley about the dress they found. Stanley tells them that the dress is his mother's and that she told him about it after the show. They ask him if they could talk to his mother about the case, and he tells them she's at his mansion. He is suddenly worried that they might find out, so he disguises himself as his mother and uses a machine to disguise his voice. At his mansion, dressed as his mother, he tells them that they ruined the dress. He tells them, "I had to dress in the janitor's office and miss my sonny boy's whole show!" Buster and Babs give up, as Stanley couldn't be in two places at once.

In the third act, Buster is still sure that Stanley is guilty. He wishes that they could find out more information about him, and Babs points to a theater that shows a movie documentary about him entitled The Sappy Stanley Story.

It was revealed in Stanley's life story, that as a baby, Stanley discovered he had the ability to make others laugh, as proven by monkeys laughing at him after throwing coconuts at his head. Driven by his need to create, Stanley also developed skills as a mechanical engineer. Eventually, Stanley's nature talents was discovered by Hollywood. Throughout the 50s, Stanley starred in such cartoons as "Two Chimps and a Blimp", "Fat Fool Follies", "Stanley Gets a Headache", and "Which Way to the Arctic?", many of which involved him getting hit by coconut-throwing monkeys with the exception of "Which Way to the Arctic" where Penguins clobbered him with the coconuts. "Which Way to the Arctic?" was nominated for the Hollywood Shloscar in 1958, but lost to "Knighty Knight Bugs". Outraged, Stanley moved to Paris, where he became a national star (similar to the career of Jerry Lewis), but slowly began building up his revenge against Bugs Bunny.

Buster and Babs meet Stanley at the theater, and tell him that they know about the trap door he used to sneak offstage, and the robot copy that was onstage as he snuck away. They reveal that they also had robot copies during Stanley's interview, as they knew that Stanley Built his robot copy from the Acme Do-It-Youself Robot Kit. They find out that he sneaked a fake award in Daffy's pocket to frame him for the crime. The real Shloskar was in his trunk. Stanley tells the bunnies that the award should of been his by "right of good taste"; he calls Knighty Knight Bugs a "stupid cartoon". Stanley tries to head back to his mansion, but Buster and Babs catch up to him. They find out that Stanley had kidnapped Bugs and forced him to watch his cartoons. They rescue him and return his prized Shloskar, and Stanley is arrested.

On their way back to Acme Acres, Buster gets the feeling they forgot something. Plucky, Hamton, and Daffy are still in jail and are stuck making License plates with Stanley. After making a license plate that says, "THE END", Daffy says, "This ending is despicable!"

Stanley: "And Farewell to thee, you scene-stealing rabbit!"

Sappy Stanley builds a robot copy of himself

The theater for Bugs' award ceremony

The Tiny Toons arrive in a wind-up car

The Tiny Toons are at the very top of the balcony, unable to get a good view of the stage

Daffy comes out of the Janitor's closet

Daffy is jealous of Bugs' Shloskar 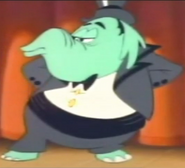 ...the real Stanley disguises himself as a lady so he can sneak away undetected

Daffy gets framed and arrested for stealing Bugs' Sloshkar

Stanley yells at the director of his next cartoon

As Stanley is filming his new cartoon, Babs sneaks onstage to interview him

Buster asks Stanley if they could talk to his mother

"Yes, that's my dress, and it's ruined thanks to you little scamps!"

Stanley's Shloskar-nominated film, Which Way to the Arctic?

...but Bugs won it for Knighty Knight Bugs

"American Cinema is nothing more than brain pudding for the common rabble. You and your precious rabbit deserve each other!"

...and the robot copy he built from the Acme Do-it-Yourself Robot Kit, the same way they did

"Gee, that sure is a funny gag. I hope somebody was watching."

Unfortunately, Plucky, Hamton, and Daffy are still in jail and are stuck making license plates with Stanley

"This ending is despicable!"

Gag Credit: Comedy in the wrong hands... - A dangerous weapon

"Aloha!"
Add a photo to this gallery

Retrieved from "https://tinytoons.fandom.com/wiki/Who_Bopped_Bugs_Bunny%3F?oldid=45995"
Community content is available under CC-BY-SA unless otherwise noted.