The game plays similarly to Puyo Pop (as well as its many adaptations) or Tetris. Various different-colored dodo eggs fall from the sky and to make them disappear, you have to match four or more of the same color. Be careful, as if four eggs of the same color are arranged into a square, they will merge into a giant egg, which can only escape with a neighborhooding group. If space runs out, then the game is over.

By making combos, you will get a token. Depending on how many tokens you have, your helper will differ. Your helpers are:

The King of the Dodos

Babs
Add a photo to this gallery 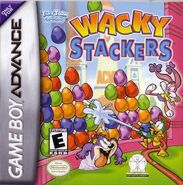 The alternative cover for Wacky Stackers 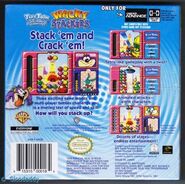 The back of the box

The European Cartridge
Add a photo to this gallery
Retrieved from "https://tinytoons.fandom.com/wiki/Wacky_Stackers?oldid=39563"
Community content is available under CC-BY-SA unless otherwise noted.