Montana Max is throwing a sports festival where the winner will get a grand prize of $1,000,000. Buster Bunny, Babs Bunny, Plucky Duck, and Dizzy Devil all want to enter the festival for their own reasons; Buster wants to prove he is the best athlete in Acme Acres, Babs wants to build her own theatre with the prize money, Plucky wants to use the prize money to become a presidential candidate, and Dizzy wants to party every day with lots of food.

Hamton is the host of Monty's sporting event, pointing out which events will happen and where they will take place. The player can choose to play as either Buster Bunny, Babs Bunny, Plucky Duck, or Dizzy Devil, and participate in various Olympic-style events. You must collect enough points by the end of each round to move on to the next. Whoever has the most points at the end of the game will win. There are four levels of difficulty; Easy, Normal, Hard, and Super, each one having about six to seven events.

This event takes place at the Acme Canyon. By tapping the A and B buttons, you will launch yourself further. Use the D-pad to run and brake. The further you go, the more stars you will get. But be careful not to go too far, or you will fall off a cliff.

This event takes place at the TV studio. Tap the A and B buttons to build up strength, then use the D-pad to lift the barbell. If you successfully lift the barbell three times, you will qualify for the next round. Look out for Li'l Sneezer, who sneezes in the background.

This event takes place at the Acme Airport, complete with a smiling airplane (from the episode, Buster and Babs Go Hawaiian) in the background. Tap the buttons to build up strength, then press the D-pad to throw the saucer when your power gauge is full. The more power in your gauge, the farther your disc will go, but be careful not to throw it out of bounds.

This event takes place at Acme Acres. Tap the X and Y buttons to run and press the A and B buttons to jump. You get points for collecting items and you lose points if you go offscreen, Montana Max hits you with a bomb, or Elmyra catches you.

This event takes place in the Tropics. Your character is launched off a railroad flatbed and into the air, where it will fly. Press the button to flap your wings and use the D-pad to control your character. A plane will lay spheres, which you can collect to get points. After a minute, the plane will take you to Montana Max's mansion. You will get a special bonus if you land dead-center, shown with an animation of your character destroying Monty's Mansion.

This event takes place at the stadium. Use the A and B buttons to charge up your speed, and press the d-pad at the right time to use the pole-vault. as soon as your character is up in the air, use the A and B buttons to steer your character and collect stars. You get points for every star you collect, but you will only keep them if you safely land on the blue gym mat.

This even takes place at Montana Max's mansion. Your character rides a lift to position itself at a certain spot to bungee jump down to a circuit board on a bungee cable. You only have a few seconds to run on the circuit board By running over numbered signs, you collect points. You can also run over speed signs to speed up, and extend signs to extend your bungee run time. If you run over a Montana Max sign, Monty will flatten your character with a steamroller, and if you run over an Elmyra Duff sign, Elmyra will hug your character, both leaving you unable to control your character for a few seconds.

This event takes place in the mountains. Use the A and B buttons to fill up your power gauge and press the D-pad to have your character chop its tree. The more strength your character has, the more wood it will chop.

Tap the A and B buttons to swim and use the D-pad to control your character. Below your score is your air meter. If your air meter drains to 0, your character will pass out and go offscreen for a few seconds to refill its air. You can get more air by rising to the surface, or by breathing in air bubbles (much like in Sonic the Hedgehog). You get points for collecting items and you lose points if you run into the hammerhead shark (from the Acme Cable TV sketch, Walt Dizzy Presents The Cat Who Thought He Was Hammerhead Shark).

This event takes place in the Courtyard. Tap the A and B buttons to build up your power gauge, then, press the D-pad to whack the launcher and launch your rocket. The more strength put in and the longer you wait, the further your rocket will go. Once your rocket is in the air, use the D-pad to control it, but watch out for various obstacles. You can use your rocket to try to push your opponents' rockets into the obstacles. 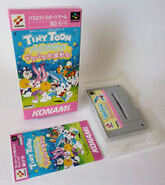 The contents of the Japanese game 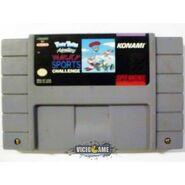 The instruction booklet for the North American release

SNES cartridge
Add a photo to this gallery

Retrieved from "https://tinytoons.fandom.com/wiki/Wacky_Sports_(SNES)?oldid=42529"
Community content is available under CC-BY-SA unless otherwise noted.