Gogo Dodo is hosting the Acme Sports festival. Buster and Babs compete in the festival to try to win.

Similar to the Super Nintendo game of the same name, or Acme All-Stars for the Sega Genesis/Mega Drive, Wacky Sports is a compilation of sports-themed mini-games. There are two different modes of play; Sports Festival and Carnival. At the sports festival, the player can choose to play as Buster Bunny or Babs Bunny and compete in a series of events. This event can be played with one or two players (provided in the latter, if they have all the hardware and link cables required). There are three difficulties; Beginner, Amateur, and Super In Carnival, only Buster Bunny can participate in events hosted by Shirley the Loon and Fifi La Fume. There are three difficulties in this mode as well; Easy, Medium, and Hard.

Baseball This event takes place on a baseball field. Dizzy Devil is the pitcher, and your character is the batter. Press the A or B button to swing the bat. The key is to time the batting so that the ball will hit the right panels, ranging from 1B (First Base) to HR (Home Run). Be careful not to hit the OUT panels. To qualify, your score must be higher than Dizzy's.

American Football This event, based on the episode, The Acme Bowl, takes place on a football field. The goal is to run across the field, while avoiding clones of Perfecto Prep student Roderick Rat. Use the D-pad to move up and down. If you successfully avoid all the Roderick clones, you will score a touchdown. However, if one of the Roderick clones hits you, you will lose the ball, resulting in an automatic disqualification. Score enough touchdowns to qualify.

Tennis This event takes place on a tennis court. Use the D-pad to move your character, press the A button to do a forehand shot, and press the B button to do a backhand shot. The goal is to hit as many panels as you can with the ball. Hit enough panels to qualify.

Soccer This event takes place on a soccer field. Use the D-pad to position the crosshair and press the A or B button to kick the ball when it is near you. The objective is to score a goal, making sure it gets past the goalie. Score enough goals to qualify. On the easy difficulty, Furrball is the goalie and Hamton] is there to kick the ball, should you miss it the first time. On the harder difficulty, Arnold is the goalie.

Basketball This event takes place on a basketball court. Press the D-pad to activate the speed gauge, then again to start running. When your character reaches the basket, press and hold down the A or B button to build up height, then let go to jump. The goal is to dunk baskets into the basketball hoop. Plucky] is your opponent, trying to keep you from getting the ball into the basket. The key to winning is pressing the buttons at the right time to acquire the right speed and height. Make enough baskets to qualify.

Golf This event takes place on a miniature golf course. Calamity Coyote] will drill a hole in the ground, and the goal is to get your ball into the hole, using as few balls as possible. Pressing up or down on the D-pad will position your character up or down, and pressing left or right on the D-pad will position the angle of the ball up or down. Collecting a carrot will add an additional ball to your inventory. On the higher difficulties, there will be obstacles your ball must also get past, including remote-controlled vehicles operated by Montana Max. Get as few balls in enough holes to qualify.

Shirley the Loon's Water Panic Game This event takes place in the Acme sewers. Press the D-pad to move left and the A button to move right. Standing below a leaky water pipe are Buster and a tired Dizzy Devil, and standing atop the pipe is Elmyra, eager to get her hands on Buster, and to make her way down, she jumps atop the water pipe to push it down. Water drops from the cracks in the pipes and it is up to Buster to catch them in a cup. When Buster's cup is full, he must take it to Dizzy for him to drink from. Each time Dizzy takes a drink, his energy bar fills up. When it is full, Dizzy will spin and push the pipe back up. The game ends when Elmyra pushes the pipe all the way down and hugs Buster.

Fifi's Water Squirting Challenge This event takes place in the Western Town. Buster is dressed like a cowboy and is shooting at Roderick Rat clones, also dressed like cowboys. Use the D-pad to move the crosshair and press either the A or B button to shoot. Shoot as many Roderick Rat clones as you can, but be careful not to shoot Sweetie Bird, Concord Condor, or Little Beeper. If you wait too long, the Roderick clones will shoot at you. Every time a Roderick clone shoots at you, or you shoot Sweetie, Concord, or Beeper, you will get a miss. The game is over when you get three misses.

If the Konami Code (Up, Up, Down, Down, Left, Right, Left, Right, B, A) is used at the main menu, a stage select menu becomes available. 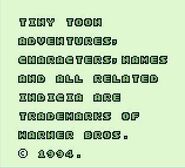 Gogo dodo is your host

Buster must dodge all the Roderick Rat clones 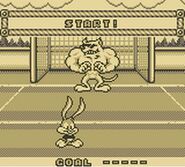 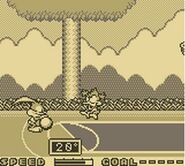 Calamity prepares to drill the hole 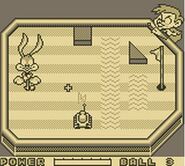 Watch out for Monty's remote-control tank

Shirley asks if you need instructions 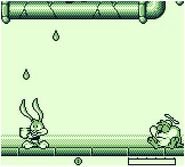 Fifi asks if you need instructions

Buster in the shooting gallery

Don't shoot Little Beeper!
Add a photo to this gallery 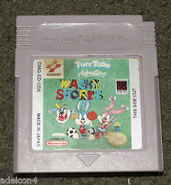 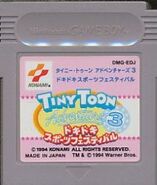 The Japanese cartridge
Add a photo to this gallery

Retrieved from "https://tinytoons.fandom.com/wiki/Wacky_Sports_(GB)?oldid=42517"
Community content is available under CC-BY-SA unless otherwise noted.