What is your favorite Tiny Toon Adventures Video Game?

This poll is now closed.

Here are the results: 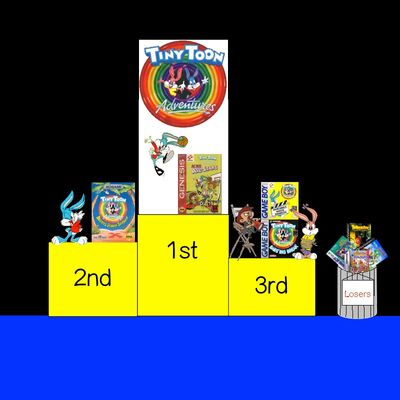 I must say, a lot of these video games got zero votes. In fact, the only ones that seem to have gotten any attention are the two Sega Genesis/Mega Drive games and the two Game Boy platformer games. I obviously couldn't put any Konami games in the trash, so I put the less popular TTA games (made by Warthog and Tarraglyph) in there instead. Since the two Sega Games tied for first, I put Acme All-Stars on top because of its variety of playable characters. I will admit, Buster's Hidden Treasure is my favorite of the TTA video games, because it, along with Rocket Knight Adventures, were Konami's entries for the Mascot Craze, and both are among the worthwhile 10% or so. Since both Sega games made it into the top 3, I see no reason not to be satisfied.

Retrieved from "https://tinytoons.fandom.com/wiki/User_blog:FlyingDuckManGenesis/Poll:_What_is_your_favorite_Tiny_Toon_Adventures_Video_Game%3F?oldid=23302"
Community content is available under CC-BY-SA unless otherwise noted.