"Can you crash beakfirst into a tree and feel no pain?"

"Suffer degrading acts of humilation and retain your sense of humor?" 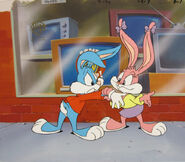 "Come on, Buster, you promised to go to the Two-Tone cinema with me."

"I don't know, Babs-a-roo. Maybe we should skip the movie and audition for Acme Oop!!"

"Buster and Babs to block, please."

The entrance to Two-Tone Town

Foxy puts a broom in his pants

"It's The Man From Acme! Big Bee's gonna sell his buzz!"

"Look, Goop. I don't have all day. You want to sell the piano or not?"

Babs vows she will help save the Two-tones

Buster awards Babs with an Emmy for her speech

Buster, dressed as Robin Hood, decides to assist Babs in her plan

"Getting acquainted, getting to find out what you're like..."

Goopy bares all during his first attempt at a spin change, much to Babs' horror

'Now, get up on that ladder and fetch! It's way up there!"

"I've made our decision."

Buster returns with the stolen music and sound effects, and swings into The Man From Acme...

...causing him to fly into the sun (A Unusual Death)

"Move it, move it!"
"Or we'll have you arrested for sidewalk obstruction!"

"This is your butt,"

"The things you gotta do to get work in this town."

Plucky struggles to get his foot out of the logo

"Our Comedy's faster, rich and alabaster!"

"And don't forget Goopy on those old piano keys!"

"Hey, it's those stars of Tiny Toon Adventures!"

"We just do game shows."

Gag credit: Quote of the Day: "Do you like our butts and ears better up or down?"