Toon Physics is the 6th episode of the second season of Tiny Toon Adventures, and the 71st episode overall.

Orson Whales is the host of today's episode and throughout the episode, he demonstrates how Toon Physics differ from real life physics.

Once Upon a Star

Elmyra Duff wishes on a star that her Barbette doll was real so that she could play with her. Her wish comes true and Barbette comes to life. Barbette rudely wakes her up and demands she get her ready. She gets Elmyra's name wrong, and interrupts her when she tries to correct her (which becomes the running gag of the episode). When Elmyra brushes her teeth, Barbette demands her own toothbrush, as it is bad hygiene to share someone else's. She pushes Elmyra, who lands in the bathtub. When Elmyra gets dressed, Barbette complains about having to wear doll clothes and demands designer clothes instead. When Elmyra compliments Barbette on how beautiful she looks, Barbette insults Elmyra, telling her she will get uglier as she grows up, whereas she, being a doll, will never age and will always remain beautiful. Later that night, Elmyra wants to take back her stinky-butt wish and wishes Barbette was just like her other dolls. Her wish backfires and brings all her dolls to life, who demand various things from her.

A Cub for Grub

Furrball is digging in trash cans because he is hungry. He notices Li'l Sneezer, who is attending a boy scout camp. Furrball sneaks onto the back of the bus, and the bus goes to Camp Acme. Furrball takes clothes from other scouts to disguise himself as a scout. The Camp counselor assigns each cub scout to pick an older explorer scout to team up with. Furrball chooses Sneezer, who asks him what he wants to do first as he measures him. Furrball wants to cook dinner, and Sneezer tells him the first step is to set up the tent. He gives Furrball an inflatable tent to set up, but as Furrball tries to set the tent up, he accidentally swallows it and it inflates inside him. Furrball spits out the tent and uses a pump to inflate himself. As Sneezer tries to decide what to eat, Furrball sets up a campfire. The smoke from the fire causes Sneezer to Sneeze, which pushes Furrball, now charred, into a tree. That night, Sneezer gets ready for bed and apologizes to Furrball for sneezing him into the poison ivy patch. Furrball sneaks up on Sneezer, who mistakes him for a forest creature, but remembers he set a trap. The trap catches Furrball and tangles him up to a tree branch. The tree branch breaks and Furrball falls into a thorny bush. Sneezer spends the rest of the night removing thorns from Furrball and Bandaging him. It's morning when he finishes, and time to head back home. As Sneezer takes Furrball to the bus with him, Furrball's banadges come loose and Furrball falls off a cliff. On his way home, Sneezer notices Furrball in a canoe trying to catch up with him. Furrball is unable to keep up and falls down a waterfall. Sneezer ends the cartoon by saying, "You know, a mouse scout must always be prepared-ed, especially when his leader is a hungry kitty!"

Every year, Babs Bunny and Plucky Duck compete to see who can get the most pictures in the Acme Looniversity school yearbook. The loser has to suffer the humiliation of the winner's choice. This year, Plucky has a secret strategy; being the yearbook editor. His job is to take club photos, but he wants to make sure he is in every photo. At the Drama Club, Babs tells Plucky he can't be in the photo because he's not in the Drama Club. Plucky proves to Babs that he is in every club, much to her disapproval. As they perform a play, a photo is taken of them and a boy wearing an orange hat. Later that day, at the Philosophy Club, Plucky is impatient to take the photo as Babs starts the meeting. Today's philosophical discussion is Plato's Famous Cartoon Violence Theories. Plucky gets hit by an anvil and tells Babs, "You just made that up!". A new photo is taken, this time of him, Hamton, Elmyra, and the Boy in the Orange Hat. At the Magic Club, Plucky is about to take his photo before Babs arrives, but Babs notices him and takes him to the guillotine to perform the disappearing head act. Just before the guillotine is about to slice Plucky's head, Orson Whales interrupts to discuss the meaning of life. A new photo is taken, this time of Hamton, Fifi, and the Boy in the Orange hat. As Plucky pulls his head, which was hiding in his body out, he heads over to the Acme Looniversity Gym to take the gymnastics club photo. Babs is at the gym, practicing her swinging. She grabs Plucky, and tosses him around the gym, eventually landing him on a balance beam. A new photo is taken, this time of Plucky, Fifi, Furrball, and the Boy in the Orange Hat. Hamton falls asleep editing the yearbook, and Plucky sneaks in, replacing most of the photos of the other students with pictures of himself. The next morning, Babs and Hamton discover they have been cut out of the yearbook. Babs tells Hamton that Plucky will get his comeuppance in the official photo count-off tonight. Babs and Plucky tie, with 302 photos each. Babs and Plucky argue over who should be the winner, but the judges find out there may not be a tie. They recount the photos, and find out the winner with 604 pictures is the Boy in the Orange Hat. Babs and Plucky are outraged, but look over and find out the judges were right, as the Boy in the Orange Hat appears in the background of every picture. Orson interrupts again, this time to tell the viewers he gets paid more for every line he says. The Boy in the Orange Hat tells the audience that he wanted to teach Babs and Plucky not to compete to win a bet. The boy reveals himself as Buster Bunny, who outrages Babs and Plucky, who beat him up.

Plucky tries to put out a stick of lit dynamite

Title Card for Once Upon A Star

What Barbette thinks Elmyra will look like when she grows up

The Wishing Star brings the rest of Elmyra's dolls to life

Title Card for A Cub For Grub 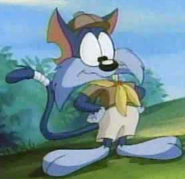 Furrballl as a camp scout

"For comedy's sake, a can of baked beans might have been funnier."

While Sneezer reads through his cookbook, Furrball thinks about cooking Sneezer

"Good night, Sir, who is inexplicably no longer wearing his uniform. Sorry I sneezed you into the Poison Ivy patch."

Sneezer thinks a monster is out to get him...

...which lands him in a thorny bush

Plucky as the dunce of last year's school photo

Plucky is this year's yearbook editor

Plucky gets sent to the electric chair...

The toons attending the meeting at the Philosophy club

...nearly gets his head sliced off at the guillotine...

...and has an unwanted growth spurt just to get his photos in the yearbook

Plucky swaps photos of the other students with photos of himself

...who is really Buster Bunny in disguise!

"Parting is such sweet sorrow."