Tiny Toon Adventures Wiki
Register
Don't have an account?
Sign In
Advertisement
in: Shows, We're All a Little Looney

Tiny Toons Looniversity is an upcoming reboot of Tiny Toon Adventures that will follow the characters into their college years at Acme Looniversity.

A reboot of Tiny Toon Adventures was announced on October 25, 2020 through the Amblin Entertainment website. The series was ordered for two seasons, with each episode being a half-hour in length. As with the original series, Steven Spielberg will return to his role as executive producer. Sam Register, Darryl Frank, and Justin Falvey will also be serving as executive producers, while Erin Gibson will be showrunner and co-executive producer. The series will premiere on HBO Max, and simulcast on Cartoon Network.

Tom Ascheim, then-current president of Cartoon Network, was quoted saying. "Tiny Toons Looniversity will capture all the clever, subversive and smart humor that made Tiny Toon Adventures such a standout series. Fans old and new will love to laugh at and with these characters all over again."

Shortly after the revival's announcement, it was reported that several of the original voice actors were not going to be involved in the series. Cree Summer had revealed she was informed that Elmyra Duff was excluded from the series. Additionally, Charlie Adler was not approached to reprise his role as Buster Bunny, nor was Maurice LaMarche as Dizzy Devil.

However, during an interview on July 12, 2021, Candi Milo said she would be returning to voice Granny in the series. It is currently uncertain if she will be reprising her main role, Sweetie Bird. A few days later, on July 15, Jeff Bergman confirmed that he would be returning to the series as well, voicing Bugs Bunny, Sylvester, and Foghorn Leghorn. He went into detail on the characters' roles in the series, explaining Foghorn would occupy as Acme Looniversity's coach, while Bugs would take on a "Dumbledore-like" personality. He also confirmed recording sessions for the series had begun by then.

On June 27, 2022, it was announced that Tiny Toons Looniversity would be part of the Looney Tunes panel at San Diego Comic-Con 2022 the next month. On July 22, it was revealed that Ashleigh Crystal Hairston would be voicing Babs Bunny in the series, instead of Tress MacNeille.

Numerous pieces of concept art for the series were shown at the panel, showing a revamped Acme Looniversity and its interiors. This also confirmed many of the original series' major characters would be returning, some with updated appearances. This included Plucky Duck, Hamton J. Pig, Dizzy Devil, Furrball, Shirley the Loon, Gogo Dodo, Fifi La Fume, Calamity Coyote, Little Beeper, Montana Max, Sweetie Bird, and Li'l Sneezer. Most notably, Elmyra Duff was included in one of these pictures, disproving the claims that she was removed. Some have suggested this meant Elmyra was added back into the series at some point or was always intended to appear in the series, but will be recast with a different voice actress, instead of having Cree Summer in the role. Steven Spielberg referred to the series as "the best iteration of Tiny Toons he'd ever seen".

It was confirmed by Len Kiraly that Buster and Babs would be presented as twin siblings in the reboot, as opposed to close friends. This decision was heavily criticized by fans of the original series and Tiny Toons creator Tom Ruegger.

On July 28, 2022, Gizmodo posted an interview between io9 and the series' crew members, who gave out more details about the series. They revealed the series was going to bring back every character from the original show, "down to Arnold the Pit Bull". They also hinted at creating an episode which takes place in outer space. Erin Gibson provided an explanation behind the choice to make Buster and Babs related, saying, "They’re fraternal twins, which was not an original plot point. I wanted to dive into a brother/sister relationship that looked really symbiotic and collaborative and supportive, not antagonistic. Seeing two people who are really on the same page, and then how do people who are so close make new friends? You know, find out who they are by these new relationships — these new college experiences while still having fun and doing the dumbest stuff you’ll ever see on TV, but having story and plot points and character development." Nate Cash added, "And they look up to the faculty, they’re established Tunes who are like their gods, but then they’re like, 'Who am I?' and 'What’s my voice?' — which is a cool place to develop them as their own characters and not just mini versions of their counterparts."

On August 3, 2022, the first season of the series was found through Entertainment Identifier Registry's website[1], confirming the following episodes: 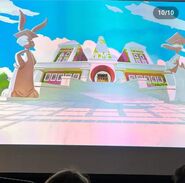