"We're here at Tiny Toon Music TV Wall-O-Phones, to find out which music videos you want to see."

"Here is Aretha Franklin with "Respect". Why can't I get any?"

"Money (That's What I Want)" by Barret Strong 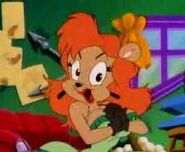 Julie Bruin open her door to see who it is, as Buster & Babs introduce their special guest

"Okay, Babs, you stand on the green spot, and Fuddonna, you're on the red."

"The best things in life are free, but you can give em' to the birds and bees!"

"Coming up next, classical music in our feature video, Top Secret Apprentice."
Add a photo to this gallery

Bugs has just created the VHS tape for episode #65 of Tiny Toon Adventures...

...and decides to safely store it on a shelf with the other 64 episodes

Buster decides to play with the machine...

...only for Bugs to angrily gesture him on doing otherwise

Buster's first fantasy is of him as a spaceman...

...but that soon comes to a crashing end

Buster's next fantasy involves him as a scuba diver...

...but gets chased by a hungry shark

Buster is about to raid the fridge...

...but the door slams him

A fly swatter is about to attack Buster

Buster gets caught in an ACME fly strip

Buster's next fantasy involves him as a caveman...

...face-to-face with a hungry T-Rex

The T-rex escapes and is about to eat Bugs...

...but Buster literally pulls the plug on him

"Woof."
Add a photo to this gallery
Retrieved from "https://tinytoons.fandom.com/wiki/Tiny_Toon_Music_Television/Gallery?oldid=47356"
Community content is available under CC-BY-SA unless otherwise noted.