Montana Max has opened a new theatre in Acme Acres, but the only movies he shows are ones where he's the hero, and Buster Bunny is the villain. It's up to Buster Bunny to go into the films and change the plots.

Press the A button to jump, the B button to kick, and press Down and either Left or right on the D-pad to speed up in a manner similar to Sonic the Hedgehog's Spin Dash move. Jumping on certain enemies will defeat them, kicking will defeat some enemies and stun some others, and the speed up is needed for certain situations, such as outrunning boulders or making big jumps.

When Buster finds Gogo Dodo, Gogo will activate a bonus roulette. Buster's bonus will vary depending on which character he lands on.

This stage takes place in a desert, staring with a western town, across the rocky mountain, and ending in a convoy of horse-drawn carriages. Enemies here include Roderick Rat clones dressed like cowboys (including ones that throw wooden boxes), Condors, and Bats. The Boss is Montana Max dressed as a cowboy, who requires three hits. You must jump on his head while avoiding his flying hat. Be careful not to fall off the horses, or you will hit a bed of spikes that they are pulling.

This stage takes place in Japan. Enemies here include Roderick Rat clones who are dressed like samurais (Including ones that throw paper fans), and frogs. Be careful of falling lanterns and collapsable platforms. Midway through the stage, you will reach a bath house where the water level rises and falls. If you get caught in the water, you instantly lose a life. The boss of this stage is Montana Max dressed as a samurai, who is riding a giant frog. Avoid the paper fans and use the frog's tongue as a bridge to get to Monty.

This stage takes place in a futuristic utopia. Enemies include Roderick Rat clones dressed like robots, including ones that hover at you. Midway through the stage, you ride a hovercar, and you must jump at the right time to get across the gaps, which is similar in concept to the third level of Battletoads. The boss of this stage is a Montana Max robot which splits into three parts. After hitting the robot, the head will fly off so you have to deal with the upper torso and legs. The legs move slower than the upper torso, so timing your jumps is the key. After a while, the head returns.

This stage takes place in a haunted house. Enemies include Roderick Rat clones dressed like mummies, bats that fly in groups of three, ghosts and walking candles. First, there is a hallway where there are four character portraits. The one with the mouth that moves is the corresponding door you have to take. Midway through, this stage has two climbs straight up, where water rises. Like the water in the Samurai stage, if you get caught in the water, you instantly lose a life. The second climb is much harder, as you need to dash jump constantly. There is another hallway with portraits of Montana Max and all their mouths move. The trick is to recognize the pattern of how their mouths move. The number of times the mouths don't move indicates what door you have to take (For example, if Monty's mouth doesn't move three times, you must go through the third door.) There are also sections with pots that release special vapors that cause you to rise. The boss is Montana Max dressed as Frankenstein. This is where the Dash Jump comes in handy. When defeated, Monty will fly out and a Roderick clone who is controlling the bottom torso runs off.

The final stage is divided into five parts. The first part is a trek through the set of the Western movie, the second the Samurai movie, the third the Future and the fourth the Monster Movie. The enemies, aside from the Roderick clones from the previous four stages, are Roderick clones that have movie cameras. The last part is the final showdown with Montana Max and a movie camera with many tricks. The camera will fire a laser and drop film reels. When lowered, it will fire a boxing glove. Monty will throw clapperboards at you. When the switch is down, kick it to lower the camera.

These bonus rounds take place in between the first four levels. These give you a chance to win continues. By pressing both B and Start at the title screen at the same time, you can access these bonus games anytime.

Buster is playing a game of Basketball with Plucky Duck. Pay attention to both Buster's Power Bar and Plucky's movements. You can only shoot when the power bar is at OK or better, and if you shoot at the right time, Buster will make a basket. To win, you will need to make make three baskets.

Bonus Round 2: Tug Of War

Arnold and Buster are both trying to pull each other into the water below, where a shark is swimming. Press left on the D-pad to pull the rope, and tap the A and B buttons to build up your strength. If Arnold pulls the rope, press down on the D-pad to weigh yourself down. Try pulling the rope when Arnold tires down. To win, you must successfully pull Arnold into the water.

Furrball is dropping Soccer Balls, which Buster is trying to score into the goal posts. Use the D-pad to move Buster, and press the A or B button to kick. For every ball you kick into the goal, you get one point. To win, you need to score 15 points. 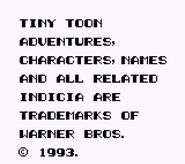 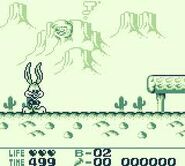 Buster in the Western Stage

Elmyra prepares to chase Buster after he completes a stage

Buster in the Samurai Stage

Buster having a Tug Of War battle with Arnold 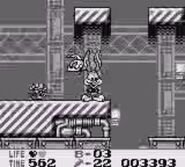 The final battle with Montana Max

Game Over without continues 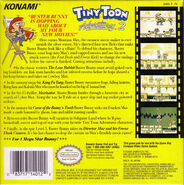 The back of the American box 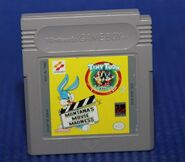 The Japanese cartridge
Add a photo to this gallery

Retrieved from "https://tinytoons.fandom.com/wiki/Tiny_Toon_Adventures_2:_Montana%27s_Movie_Madness?oldid=47372"
Community content is available under CC-BY-SA unless otherwise noted.