One day, Buster Bunny is relaxing in his home, watching TV, when Montana Max appears on the screen, announcing that he has captured Babs Bunny and has held her captive in his mansion. He plans to feed her to the sharks, so Buster has to think fast to save his best friend.

The game plays similar to Super Mario Bros. 3, in terms that it features similar gameplay and stages. The player has to find its way to the exit within the time limit, without taking damage, as taking one hit will cause the player to lose a life. By finding a heart, you can take one additional hit. If you already have a heart in your inventory if you find another, you will get an extra life. You can hold up to nine lives. By finding a ball with a star in the middle, you can switch between characters. At the end of the first five zones, you will get a key, which can open one of the doors in the final stage, Monty's Mansion. 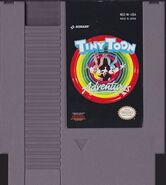 The back of the box

The back of the Japanese box
Community content is available under CC-BY-SA unless otherwise noted.
Advertisement