Tiny Toon Adventures: Babs' Big Break is a video game for the Nintendo Game Boy released by Konami in 1992.

Babs Bunny wants to become a famous star. She wants to practice at the Acme Theater, but Montana Max wants to buy the theater so he can tear it down and build a factory. Buster, Plucky, and Hamton have to help Babs fulfill her destiny and defeat Montana Max.

1. Acme Acres/Acme Looniversity - Dizzy Devil acts as both your helper and the boss of this stage. If you find him, he will burrow under the mountain. Later in the game, you have to feed him. Although Dizzy will eat anything, it is best to feed him chicken and fish, as urchins can hurt you.

2. City - Furrball is your helper in this stage. To find him. you must play a game where you have to guess which trash can he is in. If you guess right two out of three times, he will help you by crawling under the low pipes. In the later half of the stage, you will ride a train to Arnold's Gym. The boss is Arnold the Pit Bull. To defeat him, you must jump on him when he is making poses. If he catches you, he will bounce you like a basketball, and toss you in one of the hoops.

3. Haunted Forest/Haunted House - Fifi La Fume is your helper in this stage. To find her, you must press two switches that will open her cage, as she has been captured by the forest ghost. After you rescue her, she will use her smell on the trees that are blocking the forest path to knock them down. The boss in this stage is a Knight, whose detachable head is his weak point.

4. Monty's Mansion - To get to Monty's mansion, you must first travel through the rest of the forest. Calamity Coyote owns a factory, where he has built a rocket-powered bicycle. Buster is the only one who volunteers, as Plucky doesn't think the bicycle is safe, and Hamton doesn't want to fall off and get dirty. As Buster leaves, Calamity gets burned by the tailpipe. On his way to Monty's mansion, Buster must outrun Elmyra Duff.

Outside Monty's Mansion, Buster must find Shirley the Loon, as Shirley can fly and break down the door. The Wolverine has captured her, and threatens to eat her. If you defeat him, Shirley will help you by flying to Monty's Mansion and breaking down the door. After avoiding Monty's monster truck, you will come to face-to-face with Monty himself, who is in a bouncing chair. He will sell you the theater for 500 gems. Accepting this offer will only alter in dialogue sequences. To defeat Monty, you must hit him when he is standing and wobbling.

Li'l Sneezer is the host of the bonus games. By collecting enough gems, you can participate. 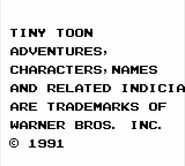 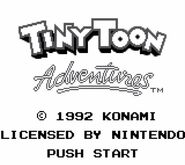 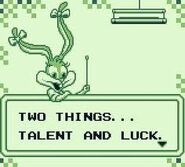 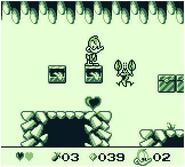 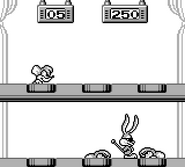 The Montana Mash mini-game with Buster 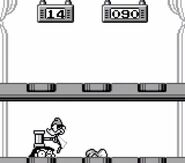 The Montana Mash mini-game with Plucky 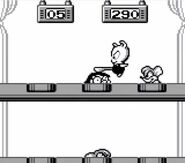 The Montana Mash mini-game with Hamton 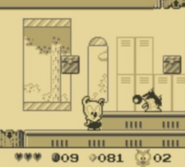 The Evil Cake spits a cherry at Hamton 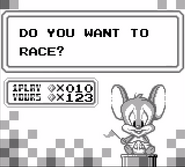 Do you want to race? 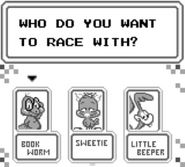 Who do you want to race with? 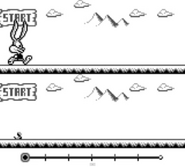 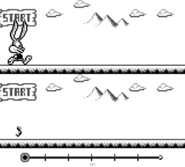 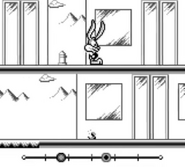 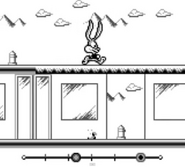 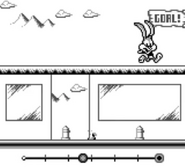 Plucky travels through the pipes 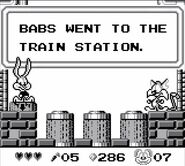 Play this mini-game with Furrball and he will help you 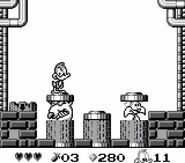 Plucky chooses the wrong trash can

Furrball crawls under the low pipes

Buster inside the train

Fifi is captured and needs your help to escape 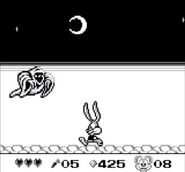 Buster comes across a phantom in the clouds

A japanese screenshot of Buster, Plucky, and Hamton having rescued Fifi

Fifi uses her stench to knock down the trees 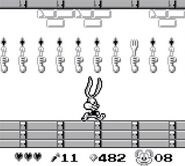 Can you find the fork hidden amongst the candles? 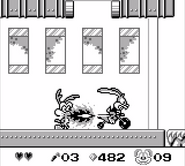 Calamity gets burned by the tailpipe 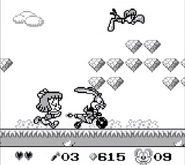 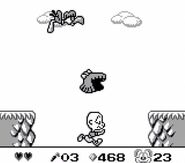 Elmyra falls off the bridge, losing her hair in the process

Buster and the Wolverine 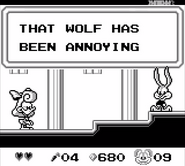 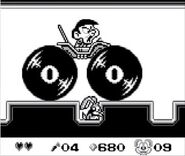 Monty tries to run over Buster with his monster truck

Game Over without continues

A screenshot from the pirated video game, Tiny Toon Adventures 6 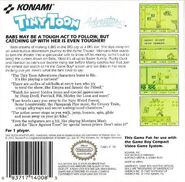 The back of the American Box 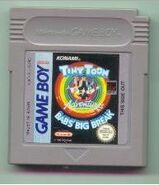 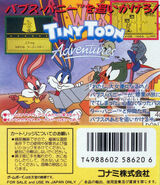 The Japanese back cover of Babs' Big Break

An insert from the japanese manual