The Wolverine is a character in Tiny Toon Adventures. He is a parody of the Wolf from Peter and the Wolf. He was voiced by Frank Welker.

Buster and the Wolverine

The Wolverine returns in the Season 3 episode "Washingtoon", chasing Buster and Babs at the beginning of the cartoon. To distract him, they send Plucky in their place (he claims he's not in the cartoon). When that fails, they resort to dropping heavy items on him. Before they could proceed to drop more heavy items on him, his tooniness is taken away by the Adults Against Funny Cartoons Chairperson and he becomes very sensitive to pain, and this time he could talk. He is once again voiced by Frank Welker.

How I Spent My Vacation

The Wolverine is in the audience on Tupelo Toad's ferry, and he joins in the chase when the other attendees chase Buster and Babs, he is not seen with the other villains when they reach dry land.

The Wolverine appears with his wife in the Animaniacs cartoon, Noah's Lark, where they are the two wolverines that board the ark. They attack Noah, who describes them as the "Lon Chaney Jr.'s of the Animal Kingdom".

The Wolverine's cameo in How I Spent My Vacation 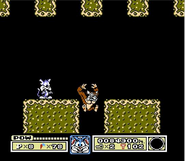 The Wolverine, in Buster's Hidden Treasure

The Wolverine's cameo in the Animaniacs cartoon, Noah's Lark
Community content is available under CC-BY-SA unless otherwise noted.
Advertisement