Start a Wiki
The Two-Headed Monster is a minor character on Tiny Toon Adventures. He appears in the episode, Stuff That Goes Bump in the Night. He is voiced by Charlie Adler.

Appearances On the Show

The Two-Headed Monster appears at the end of the episode segment, "Easy Biter", when Hamton and The Mosquito decide to sleep outside, due to the other Mosquitoes throwing a party at Hamton's House. He says, "Good Night", to them, and they run away in fear. However, this Two-Headed Monster then reveals itself to be a disguised Buster and Babs, who end the episode by saying good night to the viewers. 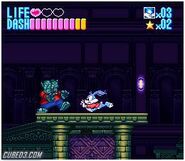 The Two-Headed Monster in Buster Busts Loose
Add a photo to this gallery
Retrieved from "https://tinytoons.fandom.com/wiki/The_Two-Headed_Monster?oldid=42396"
Community content is available under CC-BY-SA unless otherwise noted.