The Roches are a vocal group of three songwriting Irish-American sisters from Park Ridge, New Jersey. They are Known for their "unusual" and "rich" harmonies, quirky lyrics, and casually comedic stage performances. The Roches have been active as performers and recording artists since the mid-1970s, at various times performing as a trio and in pairs.

Each member has also voiced cockroach versions of themselves in the "New Character Day" episode segment of the same name. 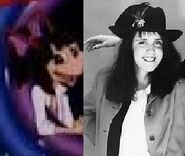 Suzzy Roche
Add a photo to this gallery
Retrieved from "https://tinytoons.fandom.com/wiki/The_Roches_(Real_Band)?oldid=44603"
Community content is available under CC-BY-SA unless otherwise noted.