"Eh. What's up, docs? Welcome to a special edition of Tiny Toon Adventures." 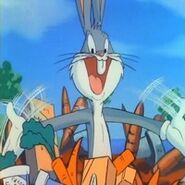 " ...but I remember it clearly as if it were a flashback."

"This is garbage! Garbage! No one wants to see a show about some rich little brat named Monty!"

(giggles) "Golly, gee whiz. Aren't I just the cutest thing you ever saw? Uh-huh, uh-huh. I sure am."

"How about a splash of color, pal?"

"Now, for the censors, how about some clothes?"

Buster is shocked that he has Babs as a female friend

"We do! We'll create the show ourselves, for everyone who loves toons!"

"For the little guys,"

"...for the strange medium guys with bad haircuts."

"I've made up a list of everything needed for a hit show."

Everybody in Acme Acres is auditioning for Tiny Toon Adventures

"I can be the birdy who is always being chased by that mean old Furrball."

"That's what this show needs, more heart! You're in!"

"I'm Gogo Dodo, and I shall perform Hamlet's Soliloquy."

Gogo begins to showcase his talents

"Hamton's a sidekick type! He has all the earmarks of a sidekick."

More villains escape from the box, including the Devil, the Metropolis Marvels and an instant martian

Honey's villain (on the left) escapes from the villains box

Jack the Ripper (on the left), a nameless caved-in face man (on the right) escape from the villains box

More and more villains are out of the box, including Gene Spilcer, one of Monty's cronies and a nameless mad scientist

"Dizzy out of here!"

"Elmyra just wants to hug you and squeeze you into itty-bitty pieces!"

"I'm Montana Max! That stupid Animator promised me my very own show!" (Monty then jumps out of the box) "Where is that no-talent hack?!"

"Now to write some stories."

Monty and Arnold spy on Buster, Babs, and Hamton

"Welcome to The Montana Max Show!"

This is a CBS Version in Michigan recorded on Friday September 14th 1990 at 8:30pm

"Time was running out for Buster & Babs."

Cbs version in Michigan before the restored version

"Send in the stunt duck!" 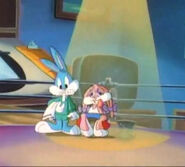 Buster and Babs was about to throw in the towel

"The Looney Tunes of Warner Brothers,"

"Tricks to help you animate"

"Imitations are a must"

"Even though you're kinda little..."

"Thank you, Bugs, from both our hearts."

"You'll be okay if you use your smarts."

"So now my song is almost through. Welcome, toons, to Acme Loo."

"You've got parsley and sage, but you're running out of 'thyme'."

"We've only got five minutes to get back our scripts and save our show!"

"Eh, you'll be fine if you remember three things..."

"One, your adversaries have tapioca for brains."

Babs and Buster pretending to be Yosemite Sam and Elmer Fudd while trying to take back the scripts from Monty.

Babs & Buster tries to escape with the scripts

"You know, I think they're learnin'."

Add a photo to this gallery
Retrieved from "https://tinytoons.fandom.com/wiki/The_Looney_Beginning/Gallery?oldid=46451"
Community content is available under CC-BY-SA unless otherwise noted.