The Great Beanstalk is a Tiny Toon Adventures video game made for the PC and the original PlayStation console in 1998. This PlayStation game was unusual as it implemented traditional 2-D side-scrolling animation as opposed to most video games of the time which used 3-D computer animation. Most of the voice cast, including John Kassir, Joe Alaskey, and Tress MacNeille returned to reprise their roles from the series. This game is a modified version of a game created for the personal computer entitled "Buster and the Beanstalk," which explains why there are references to the game being a CD-ROM game still intact.

The game is essentially an adaptation of the classic fairy tale, Jack & The Beanstalk only with Buster and Plucky in the "Jack" role.

The player takes on the role of Plucky Duck having to avoid violent sight gags such as falling anvils and hammers around the beanstalk.

In the beginning, Buster and Plucky climb up the beanstalk in search of a key to a Giant's castle for treasure. Babs takes on the role of the "beautiful and mysterious princess" who gives clues of what the player should find in order to obtain a third of the key to the castle. On each level of the beanstalk, there are clickable sight gag-filled worlds based on various nursery rhymes and fairy tales including Humpty Dumpty, Little Bo Peep, Goldilocks & The Three Bears, The Three Little Pigs, Peas Porridge Hot, Little Red Riding Hood, Old Mother Hubbard, and Hey Diddle Diddle.

Upon first entry of the castle, Plucky steals a chicken that lays golden eggs. After having been through so much difficulty to find the chicken, Plucky is reluctant to going up again, until Buster mentions there are bags of cash, which are stolen by him upon the obtaining of the second key. Plucky is excited about finally being wealthy, until Buster brings him back down to Earth to tell him of a magical golden harp that is "priceless."

After they get the final key, and the golden harp, the game ends...until Babs comes in and complains about the viewers not actually seeing the giant. Someone catches Babs' attention, and it is the giant, who turns out to be none other than Steven Spielberg.

Babs then gives a slideshow of what happened after the adventure, revealing that Buster and Plucky escaped on the harp. Babs also complained that the player did not use the "fairy princess" as much as possible ("Which means I'm calling my agent as soon as this is over.") After accidentally showing a slide from her trip to the Grand Canyon, she shows how Buster and Plucky used their riches, with Buster investing in the world's largest carrot farm and Plucky building the first above water amusement park ("...which, obviously, went under.")

Cree Summer can be heard as Elmyra in the closing credits. The game also includes non-speaking cameos by Gogo Dodo, Little Beeper, Furrball, and Byron Basset.

Voice: "It's just another hole in the wall, Floyd."

Plucky: "So that's what they mean when they say, 'The chicken's gone bad.'"

Baa Baa Black Sheep: "Yeah, yeah, yeah, three bags full. Do we have to do this every time I make a delivery?"

Baa Baa Black Sheep: "OH, DO YOU THINK FOR ONCE WE COULD TALK ABOUT SOMETHING IMPORTANT?! LIKE JEWELERY?!?!"

Plucky: "What an 'udder' failure."

Plucky: "Sorry, sister. We are looking for a key to get into a giant's castle. (to the camera) Boy, you say it out loud and it sounds so ridiculous."

Announcer: "The first paper airplane was made of...fly paper."

Announcer: "Did you see that CD-ROM drive?"

Buster: (as John Wayne) "Down the hole he was, but her sure cleaned up this town."

Director: (offscreen) "Cut, cut, cut! Don't even THINK about it! If we do that, we'll have Warners' attorneys all over us!"

Plucky: "Hey, aren't we in one of those things right now? Woah...surreal." 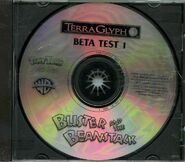 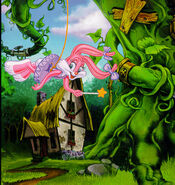 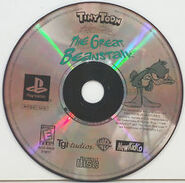 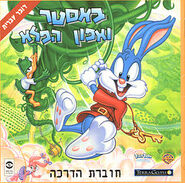 Add a photo to this gallery
Retrieved from "https://tinytoons.fandom.com/wiki/The_Great_Beanstalk?oldid=32829"
Community content is available under CC-BY-SA unless otherwise noted.