The Ghost is a minor character in Tiny Toon Adventures. He appears in the The Return of the Acme Acres Zone episode segment, Boo Ha Ha. He was voiced by Maurice LaMarche.

The Ghost is shown to look like a white ghost with a genie-like tail, black eyeballs and white dots.

Although he seems to like scaring people, he has very rare instances where he can be nice.

The Ghost first appears when his shift starts at the hotel. He notices Hamton and Plucky, who need to use the phone to call their parents. However, The Ghost tells them the phone is dead (in which case, it literally is dead), and tells them they will have to stay the night. During Plucky and Hamton's stay, the ghost tries to scare them by turning into a demon, but Plucky never notices any of his attempts. At one point, the Ghost pulls out all the stop to scare them, even going as fat to turn into a giant demon and nearly eat them. However, his shift ends and just as he is about to leave, He explains that the next shift is for the zombies. Upon seeing them, The Ghost offers to drive Plucky and Hamton home, not realizing that instead of taking them to their houses, he actually takes them to his home on Hades, where the three of them have tea.

The Ghost appears as an enemy in the Haunted Mansion stage of Buster Busts Loose for the SNES. 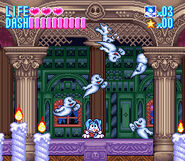 Retrieved from "https://tinytoons.fandom.com/wiki/The_Ghost_(character)?oldid=46062"
Community content is available under CC-BY-SA unless otherwise noted.