The Coyote Gang are a group of henchmen led by Coyote Kid. The gang made an appearance in the Season 1 finale, High Toon.

The first coyote is shown to be a fat guy with brown fur while wearing a white shirt with a black vest, a pair of light green jeans, a blue bandanna, a pair of gloves, he is also wearing white cowboy hat and black boots.

The second coyote who happen to be the shortest member of the gang is shown with brown fur while wearing a big cowboy hat, a red bandanna, brown boots, a black vest with a blue long sleeve shirt and pants.

The third coyote who is also a fat guy with dark gray fur is shown wearing a small brown hat (sometimes he'll wear a black hat), a black vest with a red shirt, blue pants and brown cowboy boots,

The third coyote made a appearance as an enemy in the western level for the SNES game, Buster Busts Loose. He is seen with his head out the window while he is throwing tomatoes.

Hamton being captured by The Coyote Gang, while the fifth coyote gang member (who seen on the lower left side) appeared in the episode

The Coyote Gang feeling the firey burn from the chilli 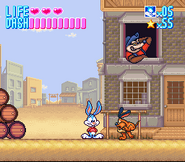 The third coyote in the Western level of Buster Busts Loose
Add a photo to this gallery
Retrieved from "https://tinytoons.fandom.com/wiki/The_Coyote_Gang?oldid=42961"
Community content is available under CC-BY-SA unless otherwise noted.