(Plucky about to ring the gong, but Buster lands on both him and the gong)

Buster decides to work out

"Arnold's Gym. We pump you up and spit you out."

"Sheesh. These cameo roles are murder!"

"His workout didn't work out!"

"I would rather you didn't see me now."

"All that exercise, huh?"

"Well, you know what they say; 'No pain, no gain'!"
Add a photo to this gallery 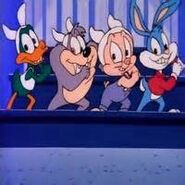 "The Buster Bunny Bunch is here to sing and dance..."

"So now you've met this bunch of loons, it's time to watch some more cartoons!"

In his nightmare, Dizzy has shrunk down to the size of a bug

Dizzy gets stuck to some bubble gum

"Ah, what is this? A tender little McBugget!"

Shirley saves Dizzy from being eaten by Sweetie

Dizzy tries to squish himself

Born To Be Riled

Plucky loses all his feathers after his temper tantrum 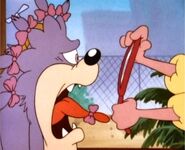 Babs begin to do her next impression

"Totally retro! In her next life, I hope she comes back as a lima bean!"

"Listen, you loon, what's with that flea-ridden rodent friend of yours?"

"Do my ears look better up or down? 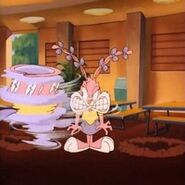 Dizzy is spinning around as Babs is feeling a bit irritated

Add a photo to this gallery
Retrieved from "https://tinytoons.fandom.com/wiki/The_Buster_Bunny_Bunch/Gallery?oldid=42706"
Community content is available under CC-BY-SA unless otherwise noted.