Love Among the Toons 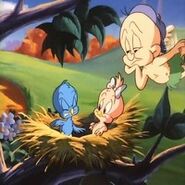 Cupid, Sweetie, and The Bluebird

"Awww, those poor little bunnies are having a tiff! But I'll fix that!"

When Buster tries to stop Babs from falling in love with Montana Max, he gets his face squished

"Did I miss something?"

Babs and Monty skip across the road

Babs and Monty are about to get married...

...but Cupid returns them to their normal (and not so loving) feelings for each other

Elmyra decides to vacuum her carpet...

...but when it gets stuck, she decides to cut it up

Tyrone putting on his shell while trying to escape from Elmyra

Bookworm getting sucked into the vacuum cleaner.

She then feeds her Goldfish salted peanuts...

Dizzy sleeping in a doghouse

The Goldfish, unable to find any water, digs his own grave

Babs tickles Buster with a flower

Plucky finds Acme Fireworks under the bales of hay...

...and fakes being sick again

The four muscular ladies that Plucky has to judge

"Aloha!"
Add a photo to this gallery
Retrieved from "https://tinytoons.fandom.com/wiki/Spring_in_Acme_Acres/Gallery?oldid=36987"
Community content is available under CC-BY-SA unless otherwise noted.