Silas Wonder is a minor character in Tiny Toon Adventures. He is a red-haired, black-bearded, yellow-eyed ringmaster who wears a black top-hat, coat and shoes, a magic stick and a red bow-tie in the Season 1 episode "Sawdust & Toonsil". He was voiced by Frank Welker.

Silas Wonder appears in "Sawdust and Toonsil". He is the greedy owner and ringmaster of the traveling circus, Silas Wonder's Wonderful Circus of Wonderment. His main attractions include several animals from Wackyland who have lost most of their wackiness due to the fact that they have not been in Wackyland for quite some time. He and his two minions manage to capture Gogo Dodo, who is trying to rescue his friends. To get into Silas' circus, Buster, Babs, and Plucky use a bag of Acme Guano to disguise themselves as a three-headed duck-billed rabbit. Silas has them perform by jumping off a high platform into a thimble of lukewarm Jell-O. One of Silas' minions pokes them with a spiked club and they fall, but Buster uses their ears to grab a trapeze. They grab the trapeze and use it to land in a tub of water.

Plucky breaks up their act and decides to work solo. Babs is worried about Plucky, but Buster tells her that Plucky will distract Silas as they rescue Gogo and his friends. Babs likes this plan, and joins Buster. As Plucky performs for Silas, Silas puts him in cage filled with lions. Buster and Babs rescue Gogo and his friends and put them on a pump cart. They suddenly remember they left Plucky behind and get him. Plucky is being tamed by the lions as Buster and Babs find him. Plucky doesn't want to leave, as he is finally a hit, but Buster and Babs drag him with them. Silas notices them escaping on the pump cart and chases after them with his train. They each grab one of Gogo's friends and jump as Silas' engine crashes into their pump cart. They race back to Wackyland, and the bridge rolls up as Silas and his engine fall, the train exploding among impact and killing Silas. Now in Heck, The Devil tells Silas, "Now my collection is complete!," and laughs evilly. Eventually, Silas got used to living in Heck, right down to being burned in the butt.

Silas' encounter with The Devil 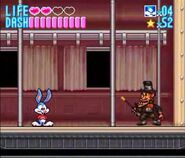 Retrieved from "https://tinytoons.fandom.com/wiki/Silas_Wonder?oldid=43008"
Community content is available under CC-BY-SA unless otherwise noted.