Babs and Gogo are shocked when a whistle blows

"Oh, excuse me. Must have been something I ate."

Gogo rolls up the bridge to Wackyland

Unknown to Silas, Gogo is spying on him from Wackyland

"I knew Silas Wonder would be back! Now's my chance!"

“This is awful! Those poor animals..”

Gogo cuts a hole in the floor of Sphinx's cage

"That Wonder guy kidnapped my pals from Wackyland a while back, and now he wants me!"

Buster, Babs, Plucky, Gogo, and Sphinx all scream in shock when SIlas' Minions find them

Gogo (imitating Edward G. Robinson) vows he will help his friends break out

"All our plans just go up in smoke!"

"This is not an illusion; it's profit."

"Vat we do now, clueless leader?"

Buster, Babs, and Plucky as a Three-Headed Duck-Billed Rabbit

"Sounds good to me!"

Plucky climbs to the top of a human pyramid

Plucky as Plucko the Clown

Silas tosses Plucky into a cage full of hungry lions 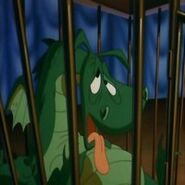 "I want you to member', that dodos don't die, they just fade away!"

"Better get Gogo to Wackyland fast!"

Buster and Babs realize that they left Plucky behind

I've heard of Lion Tamers, but this is ridiculous!

Everyone jumps off the handcar before Silas' engine crashes through it

Silas sees that the bridge to Wackyland is out

Silas and his engine fall off the cliff

Silas' Encounter with the Devil

"There's nothing like an ending with a little heart."
"Gee, thanks."

Gag Credit: This program has been edited - For your own good

"It's been surreal!"
Add a photo to this gallery
Retrieved from "https://tinytoons.fandom.com/wiki/Sawdust_and_Toonsil/Gallery?oldid=39954"
Community content is available under CC-BY-SA unless otherwise noted.