Ralph the Guard is a minor character introduced in Tiny Toon Adventures. He was originally featured in the show as an unnamed security guard who was often preventing Plucky Duck and even Buster and Babs from getting into the studios they were trying to visit. He appeared in the episodes, Hollywood Plucky, Buster and Babs Go Hawaiian, K-Acme TV and The Return of Batduck, and also made cameos in How I Spent My Vacation and Tiny Toon Spring Break.

Ralph became more prominently known for his role in Animaniacs, in which his job was to try to bring Yakko, Wakko and Dot back to the WB studio's water tower whenever they escaped. Contrary to his earlier role in Tiny Toons, where he almost always succeeded in not letting anybody get past him, Ralph was never successful at catching the Warners. Additionally, he was made more dim-witted.

Ralph was voiced by Frank Welker.

Ralph in the K-Acme TV sketch of the same name 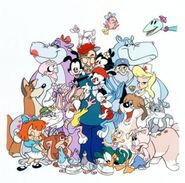 Steven Spielberg with the cast of Tiny Toons & Animaniacs, including Ralph the Guard