Tiny Toon Adventures Wiki
Register
Don't have an account?
Sign In
Advertisement
in: Video Games, Video Games for the Playstation 1

Tiny Toon Adventures: Plucky's Big Adventure is a US PlayStation game released on September 21, 2001 in North America, and developed by Warthog and published by Conspiracy Games.

Plucky attempts to build a time machine because he forgot to do his homework. However, he needs the help of his show co-stars to find the needed parts to finish the time machine.

Familiar faces from the series appear during the mission and often offer their help. However, Elmyra Duff and Montana Max are hindrances, capturing the player if they can. 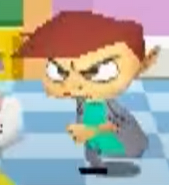