Playtime Toons is the 5th episode of the second season of Tiny Toon Adventures, and the 70th episode overall.

Buster introduces the first episode segment, playing with puppets of him and Babs. He tells the viewers that today's show is about the fun kids have playing with toys.

In the second wraparound, a commercial for Toys R Mine is featured. The commercial parodies the "I Don't Wanna Grow Up, I'm a Toys R Us Kid" song, and features Montana Max buying every toy in the store, and later destroying them.

In the third wraparound, Buster tells the viewers that not all toys have to be fancy, and that one toon's trash is another toon's treasure. To prove it, Babs drops her scarf while hang gliding and Furrball finds it in the trash can. Furrball plays with the scarf, but gets tangled up in it.

Hamton has invited Babs, Buster, and Plucky to his birthday. Buster, Babs, and Plucky immediately set off to but presents for Hamton at the Acme Mall.

At the Acme Mall's toy store, Buster decides to buy Hamton a Buster Bunny doll for his birthday. Acme-Tron, an orange cyclindrical all-purpose transforming robot, tells him that he will get a much better value if he buys him instead. He transforms into a hovercraft and Buster takes him for a test drive. Plucky's present to Hamton is a Tutor Shooter video game, and Babs' present is a Acme Lil' Superstar kit.

When Buster, Babs, and Plucky get back to Buster's burrow, they want to keep the toys they bought for themselves, although they knew they bought them for Hamton. Plucky suggests giving Hamton some of their old toys. Buster disapproves of this idea and tries to stick to the original plan by reminding his friends that they bought the toys for Hamton. He slams Acme-tron, who makes him some carrot juice before he is given away. Buster immediately changes his mind, and looks in his toy box for some of his old toys. Acme-tron tells him, "Just give Hamton a piece of junk", and Buster finds his toy airplane. Babs finds her old baby pogo stick, and Plucky find his old baby blanket. Since it's full of holes, Plucky says, "I can tell him it's a map of Guam."

At Hamton's house, Hamton opens Plucky's present first. He thinks Plucky's baby blanket is a superhero cape and puts it on. Plucky instantly remembers himself as a baby, saying, "keep blankie forever", and sadly tells Hamton to enjoy. Hamton opens Babs' present next, and immediately stars bouncing on it. Babs suddenly remembers herself as a baby, and how much fun she had bouncing on it. Buster gives Hamton his present, the toy airplane. When the toy airplane falls apart, Buster remembers it was the exact same toy airplane that broke when he was a baby.

Buster, Babs, and Plucky feel guilty about giving up their favorite toys, and they tell Hamton that they got greedy and wanted to keep the toys they bought him for themselves. They decide to trade Hamton his real gifts for their old toys, a deal Hamton agrees to. When his friends aren't looking, Hamton tells the viewers, "Just between you and me, it's not even my birthday!"

Fit to Be Toyed

Montana Max is bored with all the toys he has. He decides to destroy the old toys to make room for new ones. He dresses in a soldier uniform and wraps his toys in sticks of dynamite. One of the toys lands in the drink of his Father, who is relaxing by the pool. Monty's father is fed up with his son destroying his toys, and calls Toys 4 Tots, saying he has a donation. Toys 4 Tots sends a machine with a vacuum that sucks up the toys. The machine also strips Monty of his soldier uniform, leaving him in nothing but a diaper. Monty isn't worried at first, as he can buy all the toys he wants with his Acme Excess charge card, but then his father takes it from him and cuts it up, telling him, "It's expired". With no toys left to play with, Monty asks his father, "What am I supposed to do now?", and Monty's father tells him to use his imagination. Monty hasn't used his imagination for a long time, and doesn't know what it is.

Monty first imagines that the paddle ball is a musical instrument, and that he is performing in a jazz band with Dizzy Devil and Calamity Coyote. Elmyra Duff shows up, and slams Monty down. She then bathes him. Monty doesn't like this fantasy at all.

Next, Monty imagines that he is a caveman and his paddle ball is a club tied to a coconut. He is hunting dinosaurs that resemble Buster and Babs. Unfortunately, his club is no match for the Buster dinosaur, and he sends him flying upwards.

Monty then imagines he is in space, as an astronaut. He uses the paddle ball as a spaceship that abducts him, and later as a weapon to battle the alien overlord. Back in the real world, he then sees his father, who he accidentally hits with the paddle ball. He tells his father that he was using his imagination. His father is proud of him, as imagination is where real play starts. He gives him back his newly repaired American Excess Card. Monty's imagination asks him if he's learned anything about imagination, and Monty tells him, "I'll never leave home without it."

A silent short. Furrball wakes up from his cardboard box as Mary Melody dries her hair. Her hair ribbon falls out the window and lands on Furrball's nose. The wind blows the ribbon out of the alley and Furrball plays with it. The ribbon gets stuck to Mary's roller skate and Furrball chases after her. She gets tangled up in the ribbon and tosses it. Buster gets the ribbon caught in his bicycle, and Furrball chases it. He jumps on the back of the bicycle and tries it get it off as Buster goes down a hill. Furrball is in front of Buster and as a result, Buster can't see where he's going. He crashes into a street sign and shakes Furrball. As he takes his bike home, the ribbon flies off. It lands near Luigi's Italian Restaurant. Furrball goes inside, thinking it landed on top of a plate of spaghetti. Furrball jumps into a plate of spaghetti, angering the customers, and the manager kicks him out. Furrball finds the ribbon in a pile of garbage and chases it towards the Acme Park. He gets tangled up in the ribbon, and Little Beeper passes him, getting caught in the ribbon as well. Little Beeper drags Furrball all over Acme Acres, until finally, he stops at a cliff. Furrball lands in the Acme Garbage Dump, but is sad to see the ribbon no longer moving. He buries the ribbon, but on his way home, a raven pulls it out of the ground and the wind makes it move again. Furrball is glad to have the string back and plays with it on his way back to Acme Acres.

Buster: "We're gonna buy gifts for Hamton, our favorite butterball,"
Plucky: "We'll get our pal something fine, as long as it's under $1.99."
Buster and Babs: "Plucky!"
Plucky: "Okay, okay!"

"I just wanna have fun, I'm a Toys R mine brat,
I go running through the store, screaming, 'give me this and that'!
From games to balls, to spiky-head dolls,
it's a happy place to be!
I can break them all and my folks don't squall,
cause they all belong to me!"

Babs Bunny as a baby, bouncing on her first pogo stick

Buster Bunny as a baby, playing with his toy airplane

The title card for Fit To Be Toyed

Monty decides to destroy his old toys to make room for new ones...

...so he dresses in a soldier uniform and wraps his toys in sticks of dynamite

Monty with his shrunken imagination and a paddle ball

Monty has afantasy sequence where he, Dizzy, and Calamity are beatniks...

...until Elmyra gives him a bath

"Drat! I just had this washed!"

Monty as a spaceman, battling an alien overlord 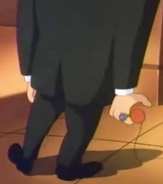 Title card for Strung Along Kitty

Furrball gets tangled in the ribbon

Furrball is happy to see the ribbon moving again

Gag Credit: Congratulations! - You have just wasted a half hour of your life!

"ROAR! Meow."
Add a photo to this gallery