In the Spring Break Special, Pinky and the Brain make cameo appearances as two of the caged pets when Elmyra announces that she is going to catch the Easter Bunny, whom she believes is Buster Bunny. (The epilogue to the special ends up confirming this to be true.)

In the Night Ghoulery Sketch, Frankenmyra and Dizzygor, the Brain makes a brief cameo appearance when Elmyra as Dr. Frankenmyra asks Dizzy as Dizzygor to bring her a brain for her monster. Dizzy empties a jar that has the Brain inside, who says, "The obvious nature of this pun belittles us all." Elmyra then says to Brain, "Ooh, I'll play with you later!"

Both Pinky and the Brain appeared alongside Elmyra in the short-lived and ill-fated spin-off, Pinky, Elmyra, and the Brain. Their cameo appearances above, as well as Elmyra's line in the latter, may be a possible foreshadowing.

Pinky and the Brain's cameo in the Spring Break Special

Pinky, Elmyra, and the Brain in the infamous spin-off of the same name 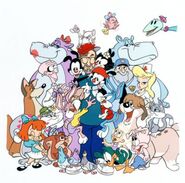 Steven Spielberg and the cast of Tiny Toons & Animaniacs, including Pinky and the Brain
Mario lasno acme.jpg
toon
Add a photo to this gallery
Retrieved from "https://tinytoons.fandom.com/wiki/Pinky_and_the_Brain?oldid=40586"
Community content is available under CC-BY-SA unless otherwise noted.