Pinky, Elmyra, & The Brain (originally titled Pinky & the Brain Meets Elmyra, The Continuing Adventures of Pinky & the Brain, and Pinky & the Brain: The Elmyra Years) is the retooling of the American animated television series Pinky and the Brain (itself a spin off from Animaniacs), with the title characters being joined by Elmyra Duff from their other show, Tiny Toon Adventures. The show is executive produced by Steven Spielberg and the series was produced by Amblin Entertainment in association with Warner Bros. Animation, and aired from 1998 to 1999 on The WB Television Network, running for thirteen episodes. This was also Steven's last collaborative effort with Warner Animation.

Of the thirteen episodes, only six were shown before the series was cancelled. The remaining seven episodes were chopped up into segments as part of The Cat and Birdy Warneroonie Pinky Brainy Big Cartoonie Show (or The Big Cartoonie Show for short) with segments from other Warner Bros. cartoons (including Tiny Toons).

The only clear connection between this series and Tiny Toon Adventures is the character of Elmyra Duff. While she essentially has the same personality as her Tiny Toon counterpart and lives in Acme Acres, her character is different from that on Tiny Toon Adventures in various ways. She goes to a normal school with other human kids rather than her Tiny Toons co-stars, and harbors an unrequited crush on Rudy Mookich rather than Montana Max (though like Montana Max, Rudy does not return her affections). Her pets are also different than those on Tiny Toon Adventures; in this case, a cat named "Mr. Pussy-Wussy" and a turtle named "Mr. Shellbutt" (the same turtle that Pinky and the Brain hide in while looking for a new laboratory) rather than Furrball and Byron Basset. Like the other characters from Tiny Toon Adventures, Elmyra's family (consisting of her mother, father, older sister, two younger brothers, and grandmother, previously seen in the episodes, Take Elmyra Please and Grandma's Dead), were also excluded from the series.

This short-lived series continued the exploits of Pinky and the Brain, who have been evicted from Acme Labs, following its destruction in the last episode of Pinky and the Brain, and are on the run from the psychotic Wally Faust. Their life on the lam (as explained in the theme song's lyrics) leads to them hiding out in a turtle at the pet store and being purchased by Elmyra Duff.

Now living in Elmyra's bedroom, the Brain continues working on his plans to take over the world, but Elmyra proves to be quite a distraction, to the point where quite a few episodes have Brain never actually getting around to enacting any part of his plans.

Some of the series' running gags include a new variation on the "Are You Pondering what I'm Pondering?" gag in the Pinky and the Brain series, in which the Brain would ask Pinky if he had a question. Pinky would ask Brain his question, and towards the end of the episode, the Brain would answer it for him. Another recurring gag is Elmyra continually washing out Brain's mouth whenever he says something she would find offensive or merely scientific jargon that she can't understand (which she calls "naughty-waughty potty talk").

Warner Bros. network executives wanted Pinky and the Brain to be part of a sitcom "more like The Simpsons". In a press release, Warner called the move "A fresh approach to popular favorites Pinky and the Brain." The idea, however, was panned by many animation fans, namely those of Pinky and the Brain and Tiny Toon Adventures alike, as well as the producers of the series. Former WB writer and producer Peter Hastings even left Warner Bros. for Disney over the decision.

Even before Pinky, Elmyra, and the Brain, dissatisfaction with Warner Bros.' decision to change Pinky and the Brain showed up in some of the later episodes of the series. The last script that Peter Hastings wrote before leaving Warner Bros. was the episode, You'll Never Eat Food Pellets In This Town Again, in which the demise of Pinky and The Brain is caused by the Network's decisions to change the show.

Pinky, Elmyra, and the Brain has also shown dissatisfaction towards Warner Bros.; some of the lyrics in the theme song had said, "So Pinky and the Brain, Share a new domain, it's what the network wants, why bother to complain?", referring to the means of executive meddling. During this line, a clip showed Pinky and the Brain getting kicked out of the Warner Bros. office. Furthermore, a spoken line by the Brain at the end of the song adds, "I deeply resent this."

Carl's Jr. and Hardee's offered a collection of four Pinky, Elmyra, and the Brain toys with their meals.

Pinky (spoken): "Gee, Brain, what do you want to do today?"
Brain (spoken): "The same thing we do every day, Pinky, endure Elmyra, then try to take over the world!"
(Pinky and the Brain scream as Elmyra gives them a bone-crushing hug. Elmyra laughs)

Singers: The situations changed
For Pinky and the Brain
No laboratory
Alone in the rain.
And someone's looking round
For where they might be found

Elmyra: Furry things are nice
I love my talking mice

I take them to school
And make them eat rice.

I spray them with perfume
In my own bedroom.

So Pinky and the Brain
Share a new domain
It's what the network wants,
Why bother to complain?

Brain (spoken): "I deeply resent this."

The complete series was released 28 January 2014 on a two-disc DVD set. 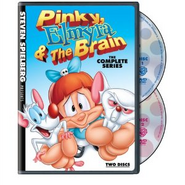 Retrieved from "https://tinytoons.fandom.com/wiki/Pinky,_Elmyra,_and_the_Brain?oldid=43276"
Community content is available under CC-BY-SA unless otherwise noted.