Start a Wiki
Pen Pal is a minor character on Tiny Toon Adventures. He is an anthropomorphic pen who lives in Wackyland. He is voiced by Pat Fraley.

Appearances On The Show

Pen Pal first appears in the episode, Her Wacky Highness, when Gogo introduces him to Babs. He can later be seen in the throne room when Babs is decreed Queen of Wackyland.

Pen Pal makes a brief appearance in the Night Ghoulery episode segment, Night of the Living Dull, where he, Gogo, Sphinx, The Elephant, Private Eye, and a Plunger hide out in a haunted mansion to escape from dull people.

Pen Pal appears as an enemy in the fifth stage of Tiny Toon Adventures for the NES (at Wackyland, appropriately enough).

Pen Pal in the Night Ghoulery sketch, Night of the Living Dull 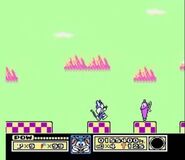 Pen Pal in the Tiny Toon Adventures NES Game
Add a photo to this gallery
Retrieved from "https://tinytoons.fandom.com/wiki/Pen_Pal?oldid=40269"
Community content is available under CC-BY-SA unless otherwise noted.