Start a Wiki
Mr. and Mrs. Duck are Plucky's parents and minor antagonists in Tiny Toon Adventures franchise. Like Babs' mother, they are only seen from the necks down. However, in the 90th overall episode, Toon TV (during the song, Yakety Yak), Plucky's father's face is shown and he is revealed to be overweight (unlike in his other appearances), wearing spectacles and having buckteeth. They are two of the few parents on Tiny Toon Adventures with recurring appearances. Plucky's father Ralph is voiced by Joe Alaskey (like Plucky), and Plucky's mother Maria is voiced by Tress MacNeille. 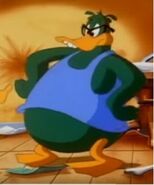 Mr. Duck in Yakety Yak
Add a photo to this gallery

Retrieved from "https://tinytoons.fandom.com/wiki/Mr._and_Mrs._Duck_(Plucky%27s_Parents)?oldid=42319"
Community content is available under CC-BY-SA unless otherwise noted.