Mitzi Avery is a beautiful, young, blonde woman that Dizzy Devil invites to the Acme Looniversity Junior Prom. She was voiced by Tress MacNeille. Named for famed Warners supervisor Tex Avery, she bears a striking resemblance to Red, a sexy character from Tex's MGM days (though with blonde hair rather than red).

Mitzi first appears in the Season 1 episode, Prom-ise Her Anything, as Dizzy's date. When Buster tells Dizzy that no one is allowed at the prom without a date, Dizzy shows him, Plucky, and Hamton his date, Mitzi. Her beauty leaves Plucky and Hamton in a trance. Later that night, as Buster and Babs bring Montana Max to the prom so that he can keep his promise to Elmyra, Monty doesn't want to be there at first, but is suddenly attracted to Mitzi's beauty. When Buster and Babs try to get Monty and Elmyra to dance with each other, Monty breaks Elmyra's heart and snatches Mitzi from Dizzy. Furious, Mitzi tells Monty that she doesn't like him and would much rather dance with Dizzy, because Dizzy is a kind, sensitive, caring person. She uses almost the exact same cruel words Monty said to Elmyra that hurt her feelings (she presumably had seen and heard how the wicked boy had treated the young girl).

In the Ask Mr. Popular double-length episode segment, Dapper Diz, Mitzi and her friends, Taffy and Jessie make a brief appearance. They want to go on a picnic with their friend, Dizzy Devil, and their beauty once again, leaves Plucky and Hamton in a trance. When Dizzy shows up in his new civilized personality, Mitzi and her friends don't recognize him and leave. Buster also mentions at the end of the cartoon that after Mitzi and her friends walked out on Dizzy, they invited him to join them in their picnic instead, much to Dizzy's ire.

Mitzi makes a brief appearance in the opening wraparound to the Season 2 episode, Love Disconnection, where she is one of the candidates for a lovely young lady that could go on a date with Gogo Dodo. In this wraparound, she is voiced by Gail Matthius (who also voices Shirley). She also makes a brief appearance in the direct-to-video movie, Tiny Toon Adventures: How I Spent My Vacation as the Drive-thru Waitress (where she was voiced by Tress MacNeille).

In Season 3, she appeared in What Makes Toons Tick with a new look. She later reverted back to her old look in her final appearance in The Return of Batduck, when Mitzi and two other young ladies begin to panic when Plucky walks into the office to meet Tim Burton.

Since her last appearance on Tiny Toon Adventures in 1992, Mitzi made a brief cameo appearance for the television special, Tiny Toon Spring Break in 1994, while during the musical segment for "Nothin' Can Be More Fun" she was seen waving at Hamton J. Pig. 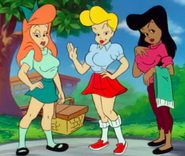 Mitzi with her friends, Taffy and Jessie 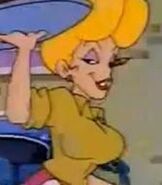 Mitzi and Hamton in Spring Break

Mitzi with Montana Max
Add a photo to this gallery

Retrieved from "https://tinytoons.fandom.com/wiki/Mitzi_Avery?oldid=45373"
Community content is available under CC-BY-SA unless otherwise noted.