Mary, Elmyra, Monty, and Plucky in the prologue

Shirley and Fowlmouth in the prologue

"I really go for guys with umbrellas in their foreheads!"

Monty relaxing in his pool

"Monty, hon, your father and I are having dinner with a nice couple from across town."

Elmyra plays with a rabbit puppet

We Now Return to My Dinner With Elmyra card

The Adventures of Fido and MewMew

Monty is shocked to find Elmyra in his limo

Monty attempts to seltzer Elmyra when he reaches her house

Monty then tries to seltzer Elmyra when she is about to kiss him.

I think I'm in love.
Add a photo to this gallery

Buster sets Babs up with Elmer when she requests "A sophisticated, older guy with a special affinity for rabbits"

"Here's a land mine covered with guacamole. Will Dizzy eat it?"

"I think it's time we associated with a better class of guys. Suave guys, sophisticated guys,"

"Guys who wouldn't feed a stealth bomber to a Tasmanian Devil."

Fifi peers out the window

Babs requests her father to drop her, Shirley, and Fifi off at the Lady of Acme Church Social Bingo

Mr. Bunny prepares to drive away 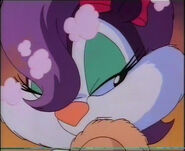 Fifi putting on make up

Babs begins to demonstrate on how to flirt with an older guy.

Fifi being chased around by one of the Perfecto Prep student

"What is wrong with Shirley?"
"Remember the movie Carrie?"

Shirley throws a tantrum reminiscent of the movie Carrie

"Let the show begin!"
Add a photo to this gallery

Shirley the loon's party dress model sheet
Add a photo to this gallery
Retrieved from "https://tinytoons.fandom.com/wiki/Love_Disconnection/Gallery?oldid=46658"
Community content is available under CC-BY-SA unless otherwise noted.