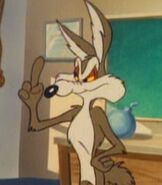 Wile E. Coyote's cameo at the beginning of the episode

A purple duck that resembles Plucky

Buster gets busted by Yosemite Sam

Plucky has overheard everything

Babs, dressed as a widow, hugs and cries for Buster...

...and even blows her nose into his shirt

The Great and Powerful Principal of Looniversity, prior to this episode

Of course, Buster finds out who's behind it; Bugs Bunny!

"Eh, I knew the kid had a real class clown in him!"
Add a photo to this gallery

Eating Between the Lines

Sweetie spies on Bookworm with binoculars

Sweetie gets chased by the animals from The Jungle Book...

...and hides out in Goldilocks and the Three Bears, only to get kicked out by an angry bear 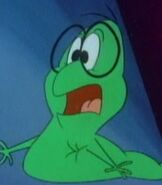 Bookworm, dressed as a teddy bear, hides out in Sleeping Beauty

"You think NASA'd have better things to do than bug me!"

The catcher from Catcher in the Rye catches Bookworm...

...while Sweetie lands in The Onion Field

Sweetie tricks Bookworm into crying with her...

...but when the lunch bell rings, he escapes into Worm Lore

"Oh, well. I can always curl up in a good book."
Add a photo to this gallery

Plucky inflates himself with oxygen

Dr. Plucky decides to give Nurse Elmyra a CAT scan...

...and he finds ducks where her brain should be

Plucky gets injured for real this time, and since he missed the quiz...

...Elmyra is his tutor, which just goes to show you, faking being sick doesn't pay

Gag credit: The show is over - Go do your homework

"Aloha!"
Add a photo to this gallery
Retrieved from "https://tinytoons.fandom.com/wiki/Looniversity_Daze/Gallery?oldid=38780"
Community content is available under CC-BY-SA unless otherwise noted.