The episode begins with a family of bugs...

...whom Buster saves from an incoming truck

"Buster, Bad news! You are the little guy!

Sneezer is about to eat the cheese wedge...

..but he sneezes and blows Elmyra's kitchen out of her house

...but is completely oblivious the bottle of Acme Bubble Bath he inadvertently knocked over

Sneezer destroys Elmyra's house
Add a photo to this gallery

The Re-Return of the Toxic Revenger

Plucky as The Toxic Revenger, friend to all living creatures...

"Grovely, get rid of that trash! I only swim in a clean pool."

"Hey! What do you think you're doing in my pool?" "The backstroke."

Monty tries to drop an anvil on Plucky, but Plucky tickles him with a party favor...

launching him into the air

"How fortuitous that our dear neighbor, Monty, lives but a stone stroll away!

"Thanks to The Toxic Revenger, the World is once again a little bit safer, and a whole lot prettier!"
Add a photo to this gallery

Byron tries to feed the Baby Birds his bone...

...but then he remembers that baby birds eat worms...

...but, not wanting to get any, he resorts to cooking spaghetti

Byron tries to calm the Baby Birds down with Buster and Babs puppets...

...but then he finds out that babies need to be burped after they're fed

The Baby Birds, who have just learned to fly, have rescued Byron from a rather nasty fall

A storyboard for "Bird-Dog Afternoon"

Another storyboard for "Bird-Dog Afternoon" 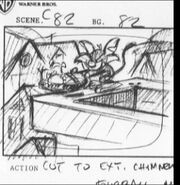 A third storyboard for "Bird-Dog Afternoon"
Add a photo to this gallery
Retrieved from "https://tinytoons.fandom.com/wiki/Looking_Out_for_the_Little_Guy/Gallery?oldid=38396"
Community content is available under CC-BY-SA unless otherwise noted.