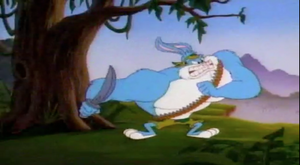 Lance Copperhead is a minor character in Tiny Toon Adventures. He is a fictional character thought up by Buster Bunny, who appears in the episode, Toons Take Over. He is voiced by Charlie Adler.

Lance is an anthropomorphic muscular rabbit, wearing an army camouflage headband and pants, with a bullet belt around his chest.

Lance was thought up by Buster, along with Babs and Plucky, who got tired of doing comedy. He was first imagined in a battlefield after freeing oppressed peoples of the world.

After the cartoon, Dawn of Despair, is done, Buster, Babs and Plucky arrive to the screening room to show the cartoon to Cooper DeVille and his yesmen. In the opening cartoon, Upon seeing Daphne carrying a heavy trunk and crying about how heavy it is, Lance appears and offers to carry it for her. After catching her, Lance throws the trunk into the ship, punches out a dock worker, and boards the ship through the cargo net with Daphne.

During the middle of the cartoon, Duke Pluckius appears and takes Daphne from Lance. During the battle, Lance pulls out twin rocket launchers and sinks the ship. While the ship is sinking, Daphne faints again and falls in the ocean, with Lance telling Duke that it was his turn to catch her.

Retrieved from "https://tinytoons.fandom.com/wiki/Lance_Copperhead?oldid=41765"
Community content is available under CC-BY-SA unless otherwise noted.