Plucky, as Pluck Heyerhdahl is straining, making it look like he's building his ship...

...but he is really just opening a bottle of mango juice 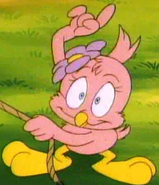 Plucky sails in the wrong direction

Gilligan and the Skipper's cameos

"Men, you're on half-rations till' we get back to England!"

"These cameos make we wanna puke!"

"Well, someone had to shut him up!"

Plucky makes it to Salinas
Add a photo to this gallery

The Making of Kon Ducki

"When the film, Kon Ducki came to the screen, it captured the imagination of millions, but how was it done?"

"Who wrote this stuff?"

Plucky takes the bucket of water from Concord

"When I first saw the cover to the book, Kon Ducki, I thought it would make a great film."

"Monsieur director Plucky, someone has parked in your very private parking space!"

"But it's worth it to look like this, don't you think?"

Plucky tries to remember his lines 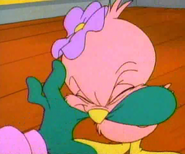 "Hamton, Babe, Swineheart, listen, sure, I could use just any old stinky duck, but you, Babe, you are the only one who can act!"

Calamity turns on the fans

How the storm scene was filmed

Li'l Sneezer provides the soundtrack for the movie

Plucky nervously awaits the results of the final product

"Parting is such sweet sorrow."
Add a photo to this gallery
Retrieved from "https://tinytoons.fandom.com/wiki/Kon_Ducki/Gallery?oldid=37741"
Community content is available under CC-BY-SA unless otherwise noted.