"Please take care of him! I beg you! Otherwise Tiny Toons will be cancelled and I'll have to work on some chipmunk show!"

"Harvey, you're gonna have to go down to Acme Acres. Buster Bunny's thinking of quitting Tiny Toons."

"There he is, Buster Bunny."
"Say, nice neck. He doesn't look like a quitter."

A parody of Sam the Snowman...

...who gets angry at Buster and Babs when they sled past him

Monty shows up late for the special's rehearsals.

Elmyra tries to get Monty under the mistletoe.

Buster cuts Monty from the Christmas special because of his broken leg.

"Hey, hi, I'm the ghost of Christmas Past. I tell you, I've seen so many past Christmases, I gave camel-riding lessons to the three wise men."

"Ta-da! Plucky the Lonely Fruitcake Nobody Wanted For Christmas!"

"I do not look like James Dean. Could you put my collar up higher and put more grease in my hair?"

Monty convinces Babs that Buster is flirting with Cher...

...and cuts a hole in the ice, leading to a tank of piranhas.

Cher about to fall into the hole

"Hey! I love this! Eat your heart out, Bob Mackie!"

"You're on, Little Drummer Duck."

Monty sabotages the microphones with sticks of dynamite 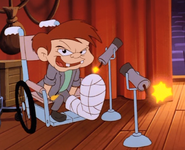 "Come, they told the duck, parum-pa-pum-pum."

Everyone gets mad at Buster.

"Montana Max is now in charge of the Tiny Toons Prime-time Holiday Spectacular!"

"Oh, no! It's worse than I thought! Buster's about to throw himself out of the picture!"

Harvey grants Buster his wish of never being born.

"For Tiny Toons, I won the Best Performance By a Duck Emmy!"

"There's lots of other Tiny Toons, but who cares who they are?"

In the Montyville reality, Plucky is the star of Tiny Toon Adventures and Babs is his helpless patsy.

"Stop, you can't drop an anvil on Babs! What are you, goofy?"

"I feel like I'm in a bad episode of Quantum Leap."

"Just wear your underwear on the outside and Warners will give you a multi-million dollar deal."

"YOU WERE NEVER ON TINY TOONS! YOU NEVER EXISTED, AND EVERYTHING IS DIFFERENT NOW!"

Buster, who has caught on now, asks what Babs is like without him.

Buster and Babs meet for the first time... in this alternate universe, at least.

"You're crazy! Plucky is the star!"

Buster begs Harvey to bring him back to the world he knows.

Harvey grants a joyous Buster his wish for everything to be back to normal.

"Happy Hanukkah, you magnificent mogul, you!"

"Feliz Navidad, you pretty planet, you!"

Nobody likes the rewrites Monty has made to the special.

Everyone cheers when Buster returns

Even after all the trouble he put him through, Buster decides to put Monty in his special after all, as the star!

"The greatest gift of all, my dear; The gift of charity."

"If you deck the halls, an anvil falls."

"If the holiday feast gets eaten by the dog,"

"And you raise a toast to yuletide, but the egg won't nog,"

"If it's New Year's Eve and you're too muscle-bound to dance,"

"And all you got for Christmas is socks and underpants,"
"Boy, I tell you,"

Buster and Babs as Charlie Brown and Lucy Van Pelt

Buster and his friends in the sleigh, performing the closing song

This isn't exactly what Monty had in mind when Buster told him he'd be the star...

"And if you ever feel like a loser again, Buster Bunny, remember..."

An animation cel of Plucky and his servants.

Promotional artwork for the TV Guide issue promoting this episode 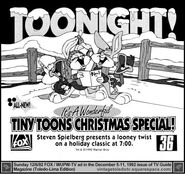 A newspaper clipping promoting this episode

TV guide toon boom ad for this episode on the front of the cover
Add a photo to this gallery
Retrieved from "https://tinytoons.fandom.com/wiki/It%27s_a_Wonderful_Tiny_Toons_Christmas_Special/Gallery?oldid=47076"
Community content is available under CC-BY-SA unless otherwise noted.