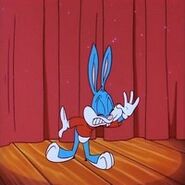 Plucky as a puppet

The blueprints for calamity's next plan...

...of course, Elmyra messes that up and it launches Calamity towards the seesaw

...which doesn't work, as Buster only takes one carrot

Lifestyles of the Rich and Rotten

Fortunately, Calamity escapes from her and the Elmyra swarm

Monty tells Buster and Babs he's cancelled their interview with him to count his allowance... 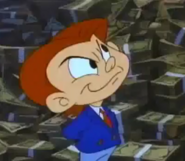 ...and calls Arnold throw them out...

...who throws them in the dumpster with his discarded expensive treasures 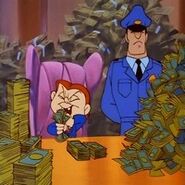 Monty catches Buster and Babs surfing in his pool

"I told you to get rid of those rodents! Now do it, or you'll be out on the street, beggin' for bones!"

"Now, either those rabbits go, or you do!"

After a nasty run-in with a popcorn machine, Arnold fans his fanny with Monty's money, much to Monty's anger

"I'll buy you an ice cream... store!"
Add a photo to this gallery

The Elmyra Swarm gets hit by numerous anvils

Plucky reads over the script...

...which was literally written by the anvils

Plucky runs into the Adults Against Funny Cartoons Chairperson, who has been monitoring this cartoon's violence

Plucky hides out in a top secret anvil shelter...

...but not even that will protect him from the World's Biggest Acme Anvil!

"And that's a wrap!"
Add a photo to this gallery
Retrieved from "https://tinytoons.fandom.com/wiki/It%27s_Buster_Bunny_Time/Gallery?oldid=45176"
Community content is available under CC-BY-SA unless otherwise noted.