Sweetie dressed as a pilot

Sweetie is about to eat a worm...

But the Bald Eagle tells her that Eagles eat Salmon...

"I can see why eagles are an endangered species."

A Grizzly Bear looks for Salmon in the river

Sweetie accidentally sets off a rocket

"Hey, Eagle pop, I'm just curious, what holiday do we celebrate next?"
"Thanksgiving, and I'm the turkey!"
Add a photo to this gallery

"Welcome back to The Sweetie Show!"

"But it's more than a show, It's a multi-media extravaganza!"

"Which brings to my next series concept; it's a heartwarming sitcom about a helpless baby birdie escaping the meniacal mind of a crazy kitty!"

...And when Sweetie lands in his mouth, he spits her out

Elmyra catches Furrball in the act of eating Sweetie and evicts him from her house...

...But she also evicts Sweetie when she tries to eat Bookworm

Furrball's stomach is happy when Sweetie lands in Furrball's mouth...

...But Furrball spits Sweetie out again. After all, there's still one more Sweetie cartoon to go!
Add a photo to this gallery

"Now, you know, I'm not just a comedienne, I'm also a great actress!"

"I could play the classics!"

"To Kill a Mockingbird!"

A present from Lenore

"Then I realized with foreboding, that this fowl was now freeloading." 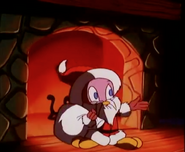 Just as Buster and Babs are ready to continue their show, they are stopped by a mob of angry bit players

"ROAR! Meow."
Add a photo to this gallery

A cel art of sweetie as a delivery bird
Add a photo to this gallery
Retrieved from "https://tinytoons.fandom.com/wiki/How_Sweetie_It_Is/Gallery?oldid=43199"
Community content is available under CC-BY-SA unless otherwise noted.