Hero Hamton is the 44th broadcast episode and sixth production episode of Tiny Toon Adventures. It was written by Gordon Bressack and Charles M. Howell, IV, and directed by Gerard Baldwin.

The episode begins with Hamton in a happy mood on his way to Acme Looniversity. Meanwhile, Montana Max is in a grumpy mood and isn't looking where he's going. Hamton accidentally hits Monty with his locker door, and Monty challenges him to a fight after school. Hamton wants no part in the fight, but Plucky tells Monty that Hamton could easily take him down. Plucky also charges admission to see the fight after school. During lunch, Hamton has a huge lunch because it could be his last. Hamton's friends help him train for the fight.

Plucky (in a tuxedo) is the announcer for the fight, as everyone is at the boxing arena waiting for it, except for Hamton, who is nowhere to be seen. He is at Porky's props class, writing his will. He tells Porky about the fight, and Porky tells Hamton that maybe Monty would leave him alone if he scared him. Hamton finally shows up at the fight, with Plucky being the most relieved to see him, but he is too scared to compete.

Buster and Babs decide to substitute for him as the Masked Marauder and Mata Harey, respectively. Plucky introduces them, as Monty sends one of his helpers, Dizzy, to take care of the costumed rabbits. He spins them around and shapes them into basketballs, as he, Monty, and Monty's other helper, Calamity, take turns bouncing them around the ring. Hamton remembers Porky's advice and steps in, pretending to be in a mad rage and using Porky's breakaway props to scare the three bullies away. Plucky makes a lot of money from the fight, but Porky takes every bit of it away to replace the broken props. At the end of the cartoon, Porky gives Hamton his permission to say his famous closing line, "Th-th-th-That's All Folks!"

Monty: "Yeah, and after school, I'll hang you out to dry!"

Hamton: "When Monty finds me, I'll be in pieces!"

Hamton singing and dancing on his way to school 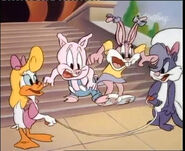 Hamton faded after finding out that Monty wants to fight

Concord lands on a whoopee cushion

Plucky charges admission for the big fight between Hamton and Monty

Buster and Babs subsitute for Hamton as the Masked Marauder and Mata Harey, respectively

"YOU HAVE AWAKENED THE WRATH OF MY SAVAGE PIGGY ANCESTORS!"

Monty, Dizzy, and Calamity begin to run away

"AND NOW YOU DARE TO CHALLENGE ME?!"

Monty, Dizzy, and Calamity realize they're no match for Hamton

"This never happens to Don King."

"It's been surreal!"
Add a photo to this gallery