Buster and Elmyra in the TTA logo

Babs as Tinkerbunny introduces the show

Babs gets run over by a stampede of animals...

...which even includes Li'l Sneezer

"My Mother told me never to talk to strangers."

"Hey, for a good meal, I'll wear almost anything."

Elmyra decides to give Buster a bath

Buster sends Elmyra down the drain

Elmyra locks Buster in a cage

"Since Bunny-wunny was playing dead, I thought up a new game, Funeral!"

Buster tries to escape from Elmyra

Buster in a cage 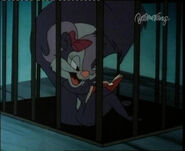 Fifi in the cage

"Haven't I seen your picture on a milk carton?"

Buster poses as a water bottle...

"Ever since Buster disappeared, I feel like my whole world is falling to pieces!"

Buster warns Elmyra that Space Bunnies from Mars are invading

The Planet of the Bunnies

Elmyra runs on a wheel

"Now, Junior, you know you microwaved the last one!"

A swarm of Buster Bunnies scaring off Elmyra

The other three Buster Bunnys reveal themselves to be Furrball, Tyrone and Fifi in costumes

Buster and the gang celebrating by singing "The magic land of the free, and the home of the bunnies"

"And that's a wrap!"
Add a photo to this gallery
Retrieved from "https://tinytoons.fandom.com/wiki/Hare_Today,_Gone_Tomorrow/Gallery?oldid=40621"
Community content is available under CC-BY-SA unless otherwise noted.