Start a Wiki
Gremlins are characters from Looney Tunes who appear occasionally on Tiny Toon Adventures.

In Journey to the Center of Acme Acres, the Gremlins live in the center of the Earth and are causing earthquakes because their giant ball of gold has gone missing, which Plucky and Hamton find out when they reach the center of the Earth. With Buster and Babs' help, they find out Montana Max has stolen their gold and get it back from him by disguising themselves, with Buster and Babs as Biff and Buffy Vanderbunny, Plucky as Skyler the Maid, and Hamton as The Butler. When Monty finds out their true identities, he tries to stop them and get the gold back, but he and the gold fall to the center of the Earth, and the Gremlins use Monty as their pinata.

In You Asked For It, a Gremlin makes a brief cameo appearance in the first wraparound, shown alongside various other Tiny Toon characters in Plucky's Acme Brain Wave Scan-o-meter machine, before Babs gets chosen.

A Gremlin makes a brief cameo appearance in the What Makes Toons Tick episode segment, Nothing to Sneeze At as one of the closet monsters looking for work.

In the Night Ghoulery sketch, A Gremlin On A Wing, a gremlin appears on the wing of the plane Plucky and Hamton are riding on, where, in a nod to the Twilight Zone episode, Nightmare at 20,000 Feet, the Gremlin tries to destroy the wing of the plane. Plucky tries to tell the flight attendant, but she doesn't believe him, as the Gremlin disappears when he tries to tell her. At the end of the cartoon, Plucky is put in a straightjacket, and tells Hamton that he was the only one who knew about the Gremlin on the wing, which is now badly damaged, the Flight Attendant reveals she was the Gremlin in disguise, and says, "Well, now, I wouldn't say that!" 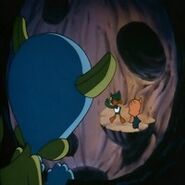 One of the Gremlins watching Plucky & Hamton 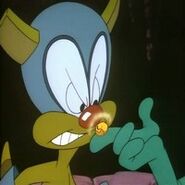 Plucky shows the Gremlin the gold

The Gremlins are furious when Buster and the gang escape.

A Gremlin is sitting next to a junior-sized Gossamer

Gremlin jack hammering the wing as Plucky screams for help

The Green Gremlin with a chainsaw. 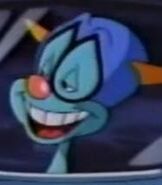 The Green Gremlin eating parts from the airplane

Plucky begins to panic when The Green Gremlin shows up.

Gremlin is about about to blow up the airplane

Plucky hands the Gremlin a lighter

The Gremlin receives the lighter from Plucky

Plucky tries to stop bomb from exploding, but the Green Gremlin has it set to blow it up anyway

The Gremlins in Tiny Toon Adventures: Defenders of the Universe

The Gremloid Leader
Add a photo to this gallery
Retrieved from "https://tinytoons.fandom.com/wiki/Gremlins?oldid=41318"
Community content is available under CC-BY-SA unless otherwise noted.