Gossamer is a recurring Looney Tunes character that appears rarely on Tiny Toon Adventures. He is a tall, red hairy monster who wears white hi-tops.

Gossamer appears in the Season 1 episode, Cinemaniacs!, in the segment, Duck Trek (a parody of Star Trek). Here he appears on a planet that Plucky, as Captain Jim Quirk (parody of Jim Tiberius Kirk); Hamton, as Spork (parody of Spock); and Furrball, as Dr. Furr (parody of Dr. McCoy), land on in search of a toupee for Plucky. There are thick hairs on the planet (later revealed to be Telly Savalas' head after it had gone bald) that he comes out from behind and growls at them, which Hamton interprets as him being the ruler of the planet. Plucky tries to reason with him, but gets smashed by his large hand and they retreat. Gossamer chases after them on a giant electric razor, but it reaches the end of its cord and is unplugged, causing him to fall off and bounce around until he is knocked unconscious. Gossamer is credited at the end as "Hair Monster."

A miniature version of Gossamer makes a cameo appearance in the What Makes Toons Tick episode segment, Nothing to Sneeze at, as one of the closet monsters looking for work.

Gossamer also appears in Tiny Toon Adventures: Night Ghoulery. He has a prominent role in a Frankenstein parody segment, where he is in the role of the monster. Elmyra, as Dr. Frankenmyra, and Dizzy, as Dizzygor, have collected nearly every part from the graveyard to construct "the world's most perfect pet," as all that is missing is the brain. They arrive back at her castle and place him on the operating table. When Dizzy checks for spare brains, they are completely out, so Elmyra gives him part of her brain. They bring him to life, ala Frankenstein-style, and Gossamer immediately grabs and squeezes Elmyra. He then rises and towers over them with a menacing appearance, but then he suddenly begins acting and speaking like Elmyra, even saying, "Eeww, look at the cutie-wutie." He grabs a hold of Elmyra and squeezes her tightly. He runs off with her as Dizzy chases them, trying to save her, but his attempts are futile as Gossamer clobbers him several times, causing him to slam against a machine, which electrifies him. Gossamer notices Dizzy's burnt body and tosses him onto the operating table to "fix" him, while tossing Elmyra into a soapy water-filled bucket to wash up. He sends Dizzy up into the sky and then goes to recover Elmyra from the bucket. He sets her down and lowers the table, which lands right on top of her. After he recovers her from underneath the table, Dizzy awakes and begins speaking and acting like Elmyra as well. She asks Gossamer, "What brain did you use?," as he lifts up the hair from his scalp, which shows stitches across his forehead, revealing that he had given Dizzy part of his brain. Elmyra yells from her castle, "I created a monster!"

A miniature version of Gossamer in the What Makes Toons Tick episode segment, Nothing to Sneeze At 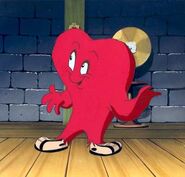 Gossamer, Dizzy & Elmyra in the Night Ghoulery episode segment, Dr. Frankenmyra and Dizzygor
Add a photo to this gallery
Retrieved from "https://tinytoons.fandom.com/wiki/Gossamer?oldid=42345"
Community content is available under CC-BY-SA unless otherwise noted.