Furrball in fear of Max and his gang

Monty and his gang

Monty and his gang steal the slushie machine

"They stole my slushie machine!"

Buster catches Monty in the act of stealing a slushie machine

Buster is accused of stealing the slushie machine...

And is sent directly to court, without passing Go or collecting $200

"Grandfather, Grandfather! Don't let them send me to the orphanage!"

"Just between you and me, folks, I'm being railroaded."

but instead of bringing evidence, he brought pictures of female ducks

Monty reads that Buster and Plucky have been jailed

"I want this garden weeded and watered before lunch, and don't give me no trouble, or I'll put youse in the hole!"

Buster's harmonica is lodged in his throat 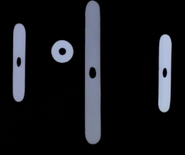 To pass the time in the dark room, Buster and Plucky play Pong with their eyes

as well as Pac-Man

When Buster lights a match, all that remains of him and Plucky are their eyes

Buster and Plucky try to dig their way out, first ending up in the Pirates of the Caribbean Ride at Disneyland...

...complete with a cameo by Indiana Jones...

...And then winding up in the Bat Cave

Rocky and Mugsy work out a 'deal' with Buster and Plucky

Babs, Hamton and Gogo all protest

Buster and his gang rap...

...except for Hamton, who sings "Charleston (Made in Carolina)"

As well as a disco dance.

"We're The Fat Guys and we'll tell you what to do, you better turn yourself in or we'll sit on you!"

"Hey, there are laws in this town, you know!"

Hamton finally wraps... presents, that is.

Gag Credit: Free T.V. - You get what you pay for

"And that's a wrap!"
Add a photo to this gallery
Retrieved from "https://tinytoons.fandom.com/wiki/Gang_Busters/Gallery?oldid=37914"
Community content is available under CC-BY-SA unless otherwise noted.