Foghorn Leghorn is a Looney Tunes star who now teaches at Acme Looniversity. He is the mentor and favorite teacher of Fowlmouth, although this has rarely been made apparent on the show.

Foghorn is voiced by Jeff Bergman in Tiny Toon Adventures.

He first appeared in the second episode, "A Quack in the Quarks". At the beginning, Foghorn was looking drowsy while Plucky was telling his story. He is also shown introducing the students to Frank and Ollie and gives Plucky permission to tour them around the school.

In the Season 1 episode "Rock 'N' Roar", he appears as the teacher of a dog obedience school. He tries to teach Buster's pet dinosaur, Rover, but ends up in a lot of pain instead.

In the "Psychic Fun-omenon Day" episode segment "Class Cut Up", he is teaching a class on dissection. At one point, he fires a starting pistol that kills a live mallard duck, Hamton's frog is revealed to be Michigan J. Frog and he tells Foghorn about it, but when Michigan won't dance, he takes Hamton to the nurse's office to see if he's feeling alright. The next day, he assigns his students to dissect earthworms, and just like Michigan, Hamton's earthworm sings.

In "Fields of Honey", Foghorn is briefly shown at a meeting held by Babs at Acme Looniversity with a majority of the other Looney Tunes teaching staff. Babs is so intent and overzealous on them building a "really big theater" and show nothing but Honey cartoons so that people would come and watch because the "strange voice" (revealed later as Bosko) told her to do so, that she appears to be going mad (even drooling over the table). They promptly send her to the nurse's office to see Elmyra, who also concludes that she is had gone crazy.

In the "Son of Looniversity Daze episode segment "Plucky's Dastardly Deed", he is the teacher of Cartoon Calculus exams. He forbids Plucky from cheating, but becomes suspicious when Plucky appears in his desk drawer (he claims he forgot to sign his name). He appears in Plucky's nightmare, reminding Plucky that cheaters never graduate from Acme Looniversity. At the Looniversity the next morning, he informs the class that on his way home last night, he accidentally dropped his suitcase in a mud puddle, ruining all the exams. He makes all the students take them over again. Although Plucky knows he won't get a good grade by not cheating, he decides to retake the test the honest way.

Foghorn is the librarian in the episode "Weirdest Story Ever Told". He tells Buster and Babs, who are talking to the viewers, to be quiet, (ironically being very loud) and tells the viewers, "Nice kids, but about as quiet as a train wreck." In the second act, Buster puts earmuffs on him so he can't hear him and Babs.

Foghorn and Speedy Gonzales appear as the hosts in the "Son of The Wacko World of Sports" episode segment "Acme Acres Summer Olympics".

In "A Ditch in Time", Buster and Babs encounter a dragon descendant of his who's holding a mideval descendent of Shirley hostage, and after defeating him, they use his fire to refuel their time machine.

Foghorn appears briefly in "Who Bopped Bugs Bunny?", where he is seen sitting on a chair alongside Henery Hawk (who is putting salt on him). Also, when Daffy is ungrateful that Plucky and Hamton tried to rescue him, Plucky mentions that he might get him to be his new mentor.

Although he does not appear in the "Here's Hamton" episode segment "Milk, it Makes a Body Spout", he is one of Buster Bunny's many imitations in an attempt to get Hamton J. Pig to laugh so hard, milk squirts out his nose.

In the Season 2 episode "Buster And Babs Go Hawaiian", Foghorn appears along with Fowlmouth and two other roosters during a luau. When Plucky accidentally burns his feet, Foghorn and the roosters think he started a new dance craze and join in. This is the only time Foghorn and Fowlmouth appear together.

In "Two-Tone Town", Foghorn appears at the beginning in a promo for Acme Oop!, in a clip from one of his cartoon. Foghorn performs on double bass in an orchestra conducted by Daffy and consisting of other Looney Tunes. Foghorn as well as the others in the orchestra are wearing light blue tuxedos and about to perform in front of a full crowd. Buster (in Robin Hood attire and intentions to steal the musical symbols) interrupts the orchestra, but a slightly annoyed Daffy denies his interruption and commands them to perform anyways. Giant musical symbols appear above the orchestra as they play, and Buster begins stealing the symbols, infuriating Daffy further. The angered duck battles Buster atop the symbols, as Foghorn and the others continue to play. Daffy loses the battle when he falls and Taz smashes in his head with his cymbals. Buster conducts a final note as Foghorn and the rest of the orchestra perform for him.

Foghorn with Buster and Rover in the park

Foghorn with a tennis ball machine

Foghorn and a yellow Henery Hawk in "Who Bopped Bugs Bunny?"

Foghorn with his student, Fowlmouth 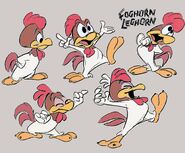 Concept art for a junior version of Foghorn (that was later rejected in favor of Fowlmouth).