Babs in her solo opening sequence

Since Babs has no mentor of her own, all she gets is study hall

"Cuckoo, cuckoo, too much study hall will drive you cuckoo!"

The vault keeper asks Buster, Plucky, and Babs what their business is

Babs in the film vault

Babs becomes starstruck when she finally sees someone she can call her mentor...

"I'm the biggest star in Hollywood"

Honey doing impressions as Bosko watches from the picture frame

Babs vows she will find Honey

Bookworm types in HONEY on the computer

Honey bee hive on the computer

With the creation of Porky Pig, Bosko and Honey's popularity sank

They took their act to the night club, with unsuccessful results

In the early 1960's, a reunion was planned, but cancelled when Honey went missing

Eventually, Bosko himself faded into obscurity

Babs is determined to find Honey

Buster bribes Hamton with a slice of Carrot Cake to get him to agree with him...

...while Plucky bribes Hamton with a wedding cake

Babs dresses as a Bunny Scout, with unsuccessful results

Babs, as a businesswoman, explains to Monty that her plan is to send anyone without money to the moon 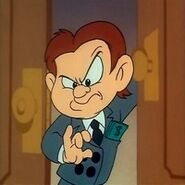 ...but begins to lose hope when no one comes...

...so she decides to advertise

An old lady, who is later revealed to be...

...Honey, who, thanks to Babs, has been restored to her former glory

Honey thanks Babs for keeping her legacy alive