Monty and Mary laughing at Dizzy

Everyone laughs at Dizzy

"You've been working all ay at your too cool school, you've earned a break, so eat some gruel!"

Babs warns Dizzy that if he watches TV while riding his bike, he will ignore street signs and wander into danger

Little Jack Horner sat in a corner, eating his christmas pie. He stuck in his thumb and pulled out a...

"This is more fun than a robot ought to have!"

C.L.I.D.E. saves Monty and everybody cheers

"Correct, Dave, but you didn't state it in the form of a question."
Add a photo to this gallery

"Hey, Gogo! We're all jumping off a cliff! It's cool! Everybody's doing it!"

"But Buster, this isn't like you!"
"I know, but in this episode, we're showing the evils of alcohol."

Buster doesn't want the Park Law Enforcer to know he, Plucky, and Hamton are engaged in underage drinking

"All right, bottoms up!"

Buster, Hamton & Plucky having the word Bar across their eyes.

The Boys are walking up to the school 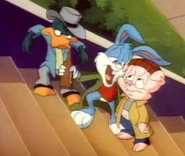 "Are we wasted or what!"

Buster, Plucky, and Hamton trying to impress the girls

The girls walk away from the boys' nasty beer smell

"Hey, watch were you're going!"

The police find out their car is being stolen

Plucky is D.W.I.; Driving While Intoxicated

Plucky drives everyone off a cliff seconds before he kills everyone.

Animated version of Plucky driving everyone off a cliff.

After driving the stolen police car off a cliff, Buster, Plucky, and Hamton die and their souls go to Heaven

"It's been surreal!"
Add a photo to this gallery
Retrieved from "https://tinytoons.fandom.com/wiki/Elephant_Issues/Gallery?oldid=45611"
Community content is available under CC-BY-SA unless otherwise noted.