Duck Vader is a minor character in Tiny Toon Adventures. He appears in the second episode of Season 1, "A Quack in the Quarks". He was voiced by Jeff Bergman.

Duck Vader's appearance is similar to the famous Star Wars villain Darth Vader's, except that he is much shorter and his helmet's mouthpiece resembles a duckbill.

Meanwhile, Buster, Babs and Hamton borrow the 1953 Duck Dodgers rocket and dress in Star Wars-esque attire in an attempt to rescue Plucky. During their escape, Plucky tries to boost Frank and Ollie's spirits with various metaphors, with little success. Back at the spaceship parking lot, Duck Vader uses his voice synthesizer to imitate Buster Bunny in trouble to capture Hamton. In his attempt to destroy Planet X, Buster uses sleeping gas on his troops, preventing the destruction. Outraged, he makes Plucky and his friends stand on the platform next to the cannon, threatening to destroy Hamton if they refuse. As they stand on the platform, Frank and Ollie escape and toss some ketchup on Duck Vader, causing Chewcudda (their alien bull who goes ballistic at the sight of anything that is the color red) to charge at Duck Vader, slamming him across the room into his cannon computer and knocking him out. This causes the computer screen to change from "DESTROY GOOD GUYS" to "DESTROY SHIP", as the colossal cannon changes directions and sends a large blast throughout the ship, blowing it up. Duck Vader is Imprisoned and Frank and Ollie become Planet X's new leaders. 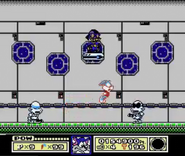 Duck Vader (really a costumed Plucky), in Buster Busts Loose for SNES
Add a photo to this gallery

Retrieved from "https://tinytoons.fandom.com/wiki/Duck_Vader?oldid=43001"
Community content is available under CC-BY-SA unless otherwise noted.