Babs calls Harriet to confirm if Buster is dating material

Babs as a football player...

"Rule #9, Small talk is unavoidable, Pick a topic you're comfortable with.

While Babs dresses, Buster tries to have a nice conversation with her father

Babs as a Japanese citizen...

...and the Loch Ness Monster

The Animator takes his brush

Calamity's eyes filling with tears due to Fifi's stink

Calamity begins his next plan

"He wants to fly into my heart" 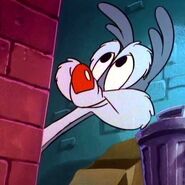 Alright, that's it! I had enough of this mushy stuff!

Come with me, Monty my boy. I got just the thing!

"Bachelor #1, if I were ice cream and you were a dessert topping, what's the capital of South Dakota?"

"Bachelor #2, we're at an expensive restaurant, and you find you've forgotten your wallet. Who was the twelfth president of the United States?"

Monty dressed as a rabbit

"I'll eat anything, except pork." 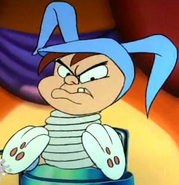 You're going to pay for this rabbit! There are laws to protect the rich you know!

...a bed made of shredded newspapers...

...and an electric fence, should he try to escape

Aloha!
Add a photo to this gallery

Retrieved from "https://tinytoons.fandom.com/wiki/Dating,_Acme_Acres_Style/Gallery?oldid=45965"
Community content is available under CC-BY-SA unless otherwise noted.